A short while ago, a friend contacted us about constructing a spacenet for his new house. This may seem an odd task to be asking a unicycling company to undertake, but naturally there is a back story. A mutual friend of myself and Donna, Sylvain Burki, passed away tragically at the end of 2015. As a memorial and honour of him we held a Park Play Session and constructed a massive spacenet reminiscent of those constructed by Andy Lewis and the Moab Monkeys. The spacenet resembled a glorified dream-catcher design. Based on this, we were apparently the most qualified team to take on the task of building Charl’s net. 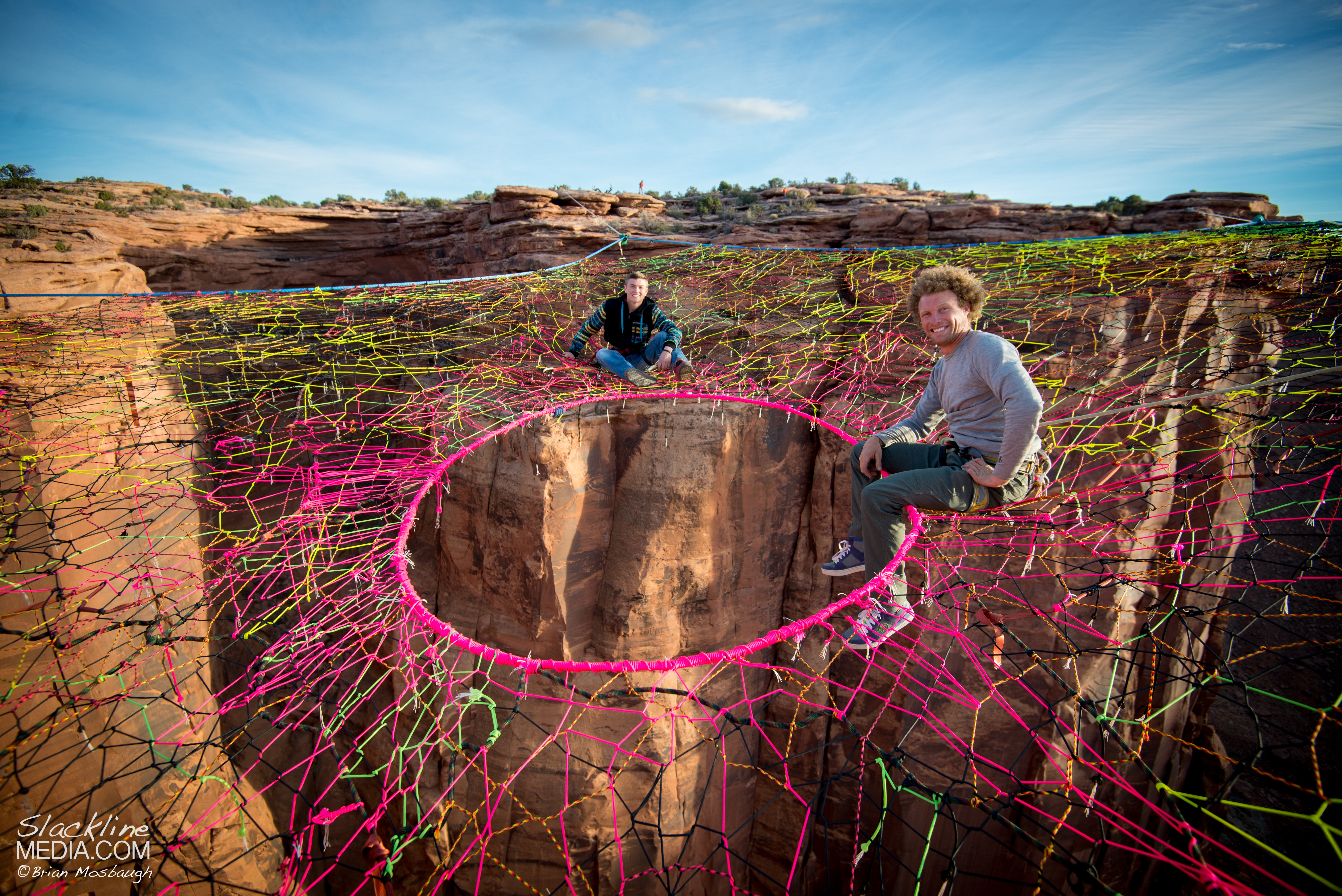 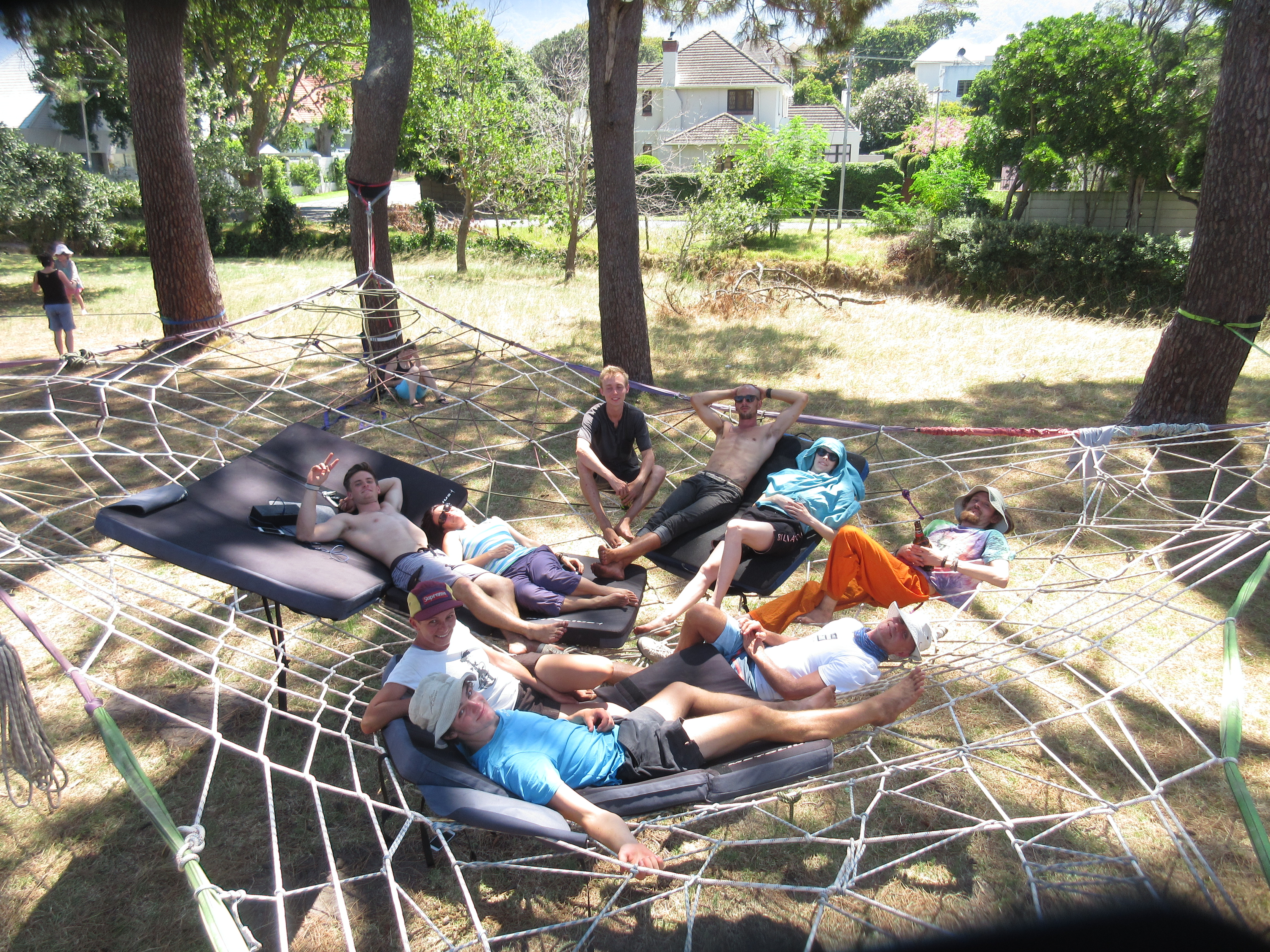 Many nets are constructed by using a bend or knot that does not isolate each mesh of the net, the dream-catcher design for example. This was unsuitable for our purpose, as we wanted to ensure maximum safety and even spacing between each mesh. It was clear that children would be the predominant users of this net, so small mesh sizes and safety were absolutely imperative (not that safety isn’t imperative for adults too!). It became a toss-up between a reef knot net configuration and a traditional fisherman’s netting knot. Both are aesthetic knots, and suitable for our purpose, but would create a slightly different weaving pattern. In the end we chose a traditional fisherman’s netting knot.

We managed to find samples of each colour we intended to use. We chose a Dyneema Super Lite rope for a couple of reasons. Dyneema has a wonderful specific strength, and in combination with a resilient polypropylene sheath allows for a small diameter rope with sufficient strength and durability for the task at hand. We chose 5mm as it retains a good strength, whilst not being too thick and cumbersome neither too thin and painful under foot. Luckily Southern Ropes makes this rope in a number of vibrant colours.

OddWheel Unicycle HQ went on a road trip out to Grabouw to investigate the much anticipated space we would construct our net over. The house is situated in a stunning location, overlooking the Grabouw mountain range. The house is modern and industrial in its architecture, yet elements of playfulness are apparent throughout the house. Getting to business, we measured up the space for the net at 3050 x 1900 mm, and mentally measured up the task we faced.

In order to give a rough approximation of the length of rope required for the project, some simple algebra could be implemented. If our length is seen as the hypotenuse of each triangular block of the mesh, then by dividing the total length by the root of the sum of the square of the other two sides (mesh size) c.f. Pythagoras’ theorem, we can work out how many blocks the length and width of the net will comprise of. Furthermore, we can then work out how much rope is required for each block, and “hey presto” we have an approximate length. In this calculation I incorporated the length of a knot for each block when dividing by the total length to ensure we didn’t make too many blocks. Likewise, the length of rope necessary to make each knot was also included into our rope length calculation.

In our endeavor to get rope with pretty colours, we went on quite a wild goose chase around Cape Town. In the interim time between our telephonic enquiries and actually procuring the rope, someone seemed to have bought out all the 5mm Dyneema Super Lite rope! After a trip into the CBD, whereby a shop owner gave me a false promise of ocean blue 5mm Dyneema Super Lite (it was actually 6mm on closer inspection) I was off to the manufacturing plant of Southern Ropes for a brief sojourn around the factory floor trying to find the manager, who could sell me a roll. Eventually the day came to a close with all three colours in hand, just in time for evening traffic for my victory lap home.

The next day we set about actually starting the weaving process. After a significant portion of time trying to establish the intricacies of “casting on” the rope to begin the process, we were eventually under way. The bulk of 100m of rope proved a struggle whilst weaving, but we were apprehensive to cut the rope into sections. Hence it transpired that we pulled through the entire rope on each section of tying the knot. Work to make severe callouses and tired forearms. Whilst we threaded spaghetti, I tried to do some mental maths as to how many meters of rope we would eventually pull through in the entire construction, but sheer horror inhibited a final result being estimated.

We scrapped the concept of a frame to build the net onto, and instead created a rudimentary loom system. By using two pieces of 38 x 38 mm wood and spacers the knots could be tied onto the previous row of loops with even spaces to create a neat net. Pulling, pulling, pulling… Day 1 resulted in a mere single row of usable net, with a width of 26 meshes. The length was proposed to be 32 meshes; we were going to be here pulling rope for months!

We found that by wrapping the rope around the 38 x 38 mm wood and knotting the next loop around another piece of the same wood, a spacer of 100 mm was required. However, after the first row we realised that the 38 x 38 mm wood wouldn’t slide into the mesh since space had been taken up by the knots on each side. Another trip to the hardware store and one 32 mm diameter round curtain rail rod later, and we were back in business. This was now the back piece of our loom, whilst the original 38 x 38 mm wood was implemented on the leading end.

Slowly but surely we refined our technique at making each knot, until we didn’t have to talk our way through each step of the process. By day 3 we could complete a row in two hours; not bad, but still highly time consuming. Now I can see why the industrial revolution came to fruition! Fantasies of winches to pull the rope through and robots to intricately knot each mesh wafted around my head whilst we kept on pulling, pulling, pulling…

However, a couple of rows down, the net was starting to look beautiful, and I was truly proud of the fruits of our labor. There is a beauty to a hand crafted product. Maybe its my sweat droplets glistening off the rope that makes it look so beautiful.

At about this point in the process, we found that pulling the latest row of loops off the square 38 x 38 mm wood was ever so tiresome and serious time consumer in the process, so we decided to implement a round object instead, which could easily twist out. By working out the perimeter of the square wood, we found that 50 mm diameter round pole give us an equivalent sized loop. 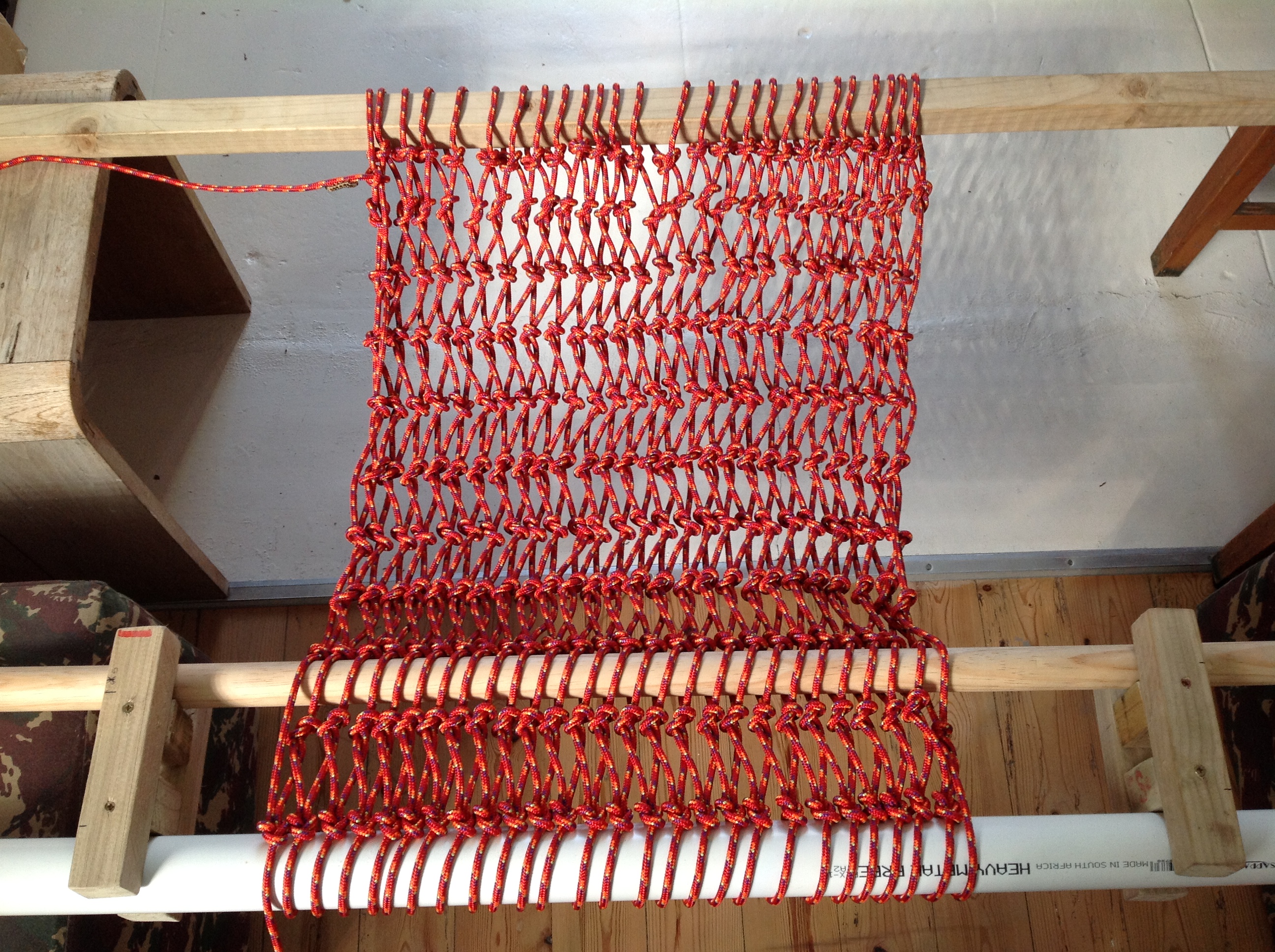 Whilst Donna skipped off to summer in San Sebastian, Spain for Unicon 18, I spent approximately 45 grueling hours hauling rope in grizzly Cape Town winter. I will save details at this point, since I think my mind has blanked much of it out. I would like to make a special shout out to Sir David Attenborough though; whose soothing voice depicting the scenes of our natural world took me through the darkest hours.

Countless rows of knots later (probably 46 in actuality) and I had run out of rope. The three colours – red, purple and blue – looked spectacular together. Although I felt proud of the accomplishment thus far, I still had trepidation towards the installation. I had stretched the net out in the garden with a pulley rig and it JUST made the required length. Moreover, it was debatable whether my technique of tensioning the net in situ would be effective. I planned on attaching three edges with cable ties, then pulling it taught with a pulley and bar. I guess I’d just have to wait and see.

Well the day finally arrived, and we set off to Grabouw once again. It was a pre-frontal day and highly atmospheric to say the least. After cutting out the original net, we lay the new net down under the space; it looked very small. 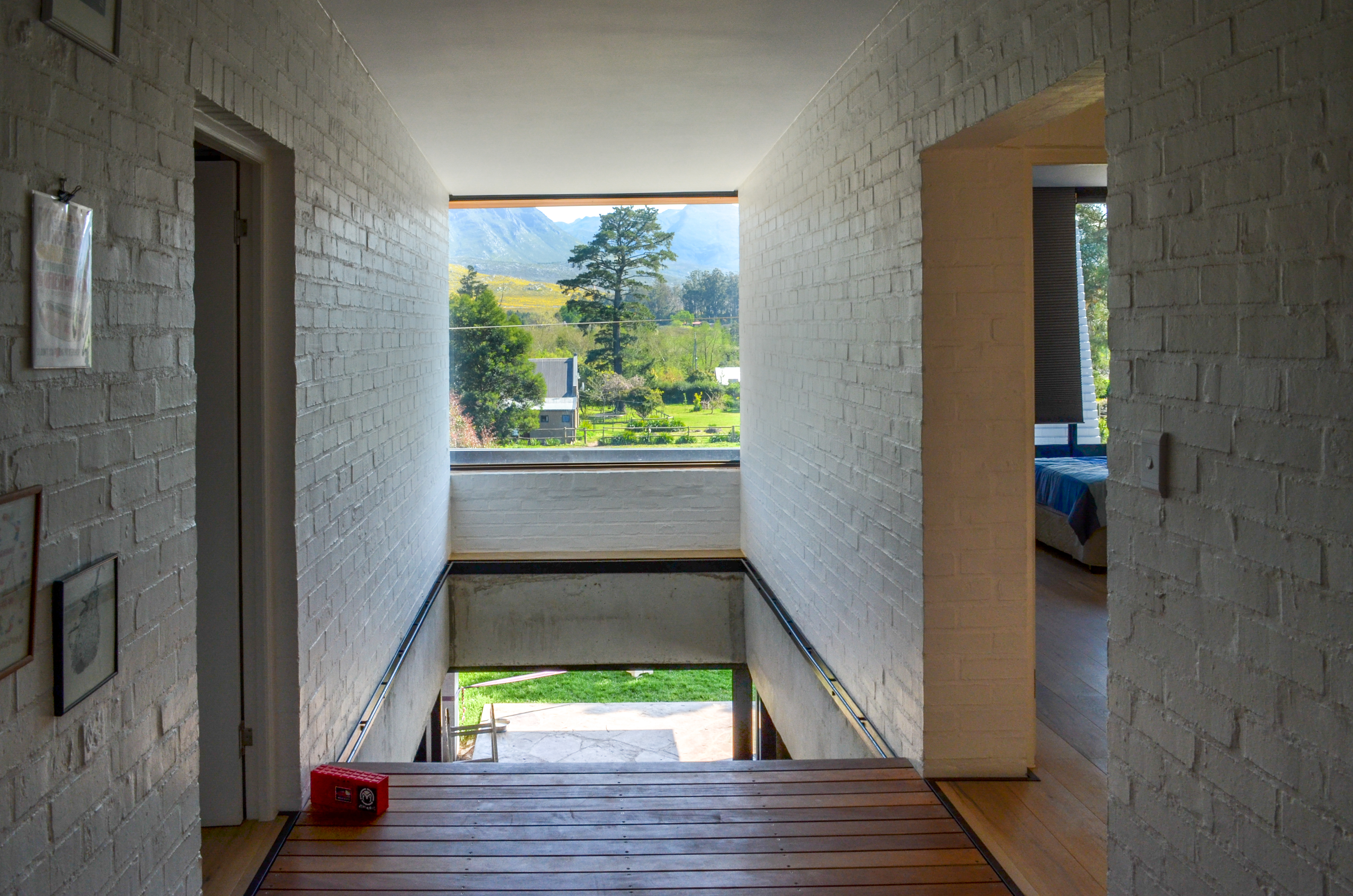 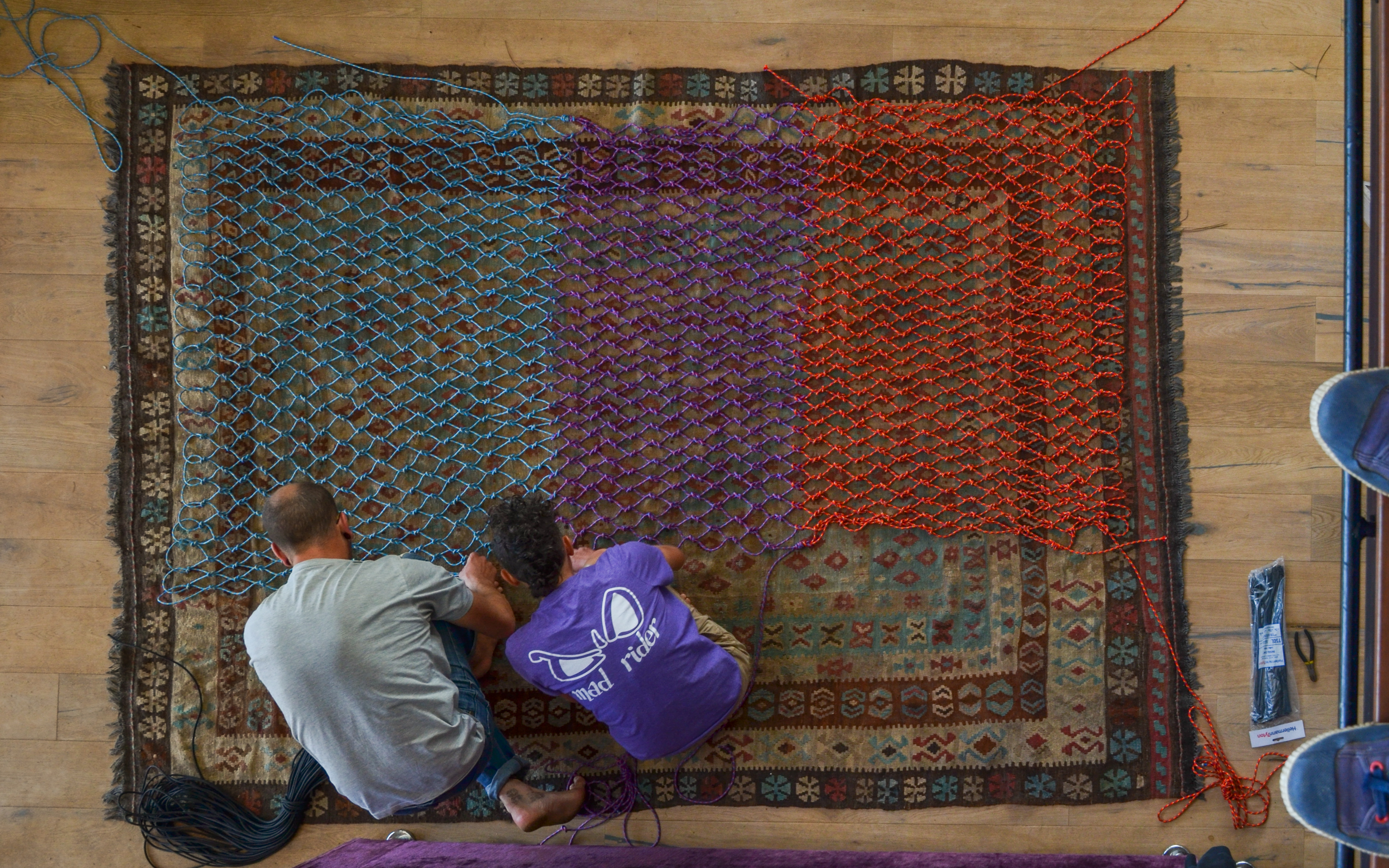 Anyways, we badgered on, and started by attaching it at the far short end with numerous cable ties. Next, we attached the two long edges. We then took cable ties to a row of knots 5 spaces from the end and attached a steel bar off which we would tension the net with a pulley rig. Thankfully Charl had another pulley rig so we could equalize the tension easily. However, my steel bar was a bit too long so Donna and Charl ran off to a neighbour to source a hacksaw. I took the opportunity to hop onto Charl’s garden midline, which was a lot of fun in the wind. 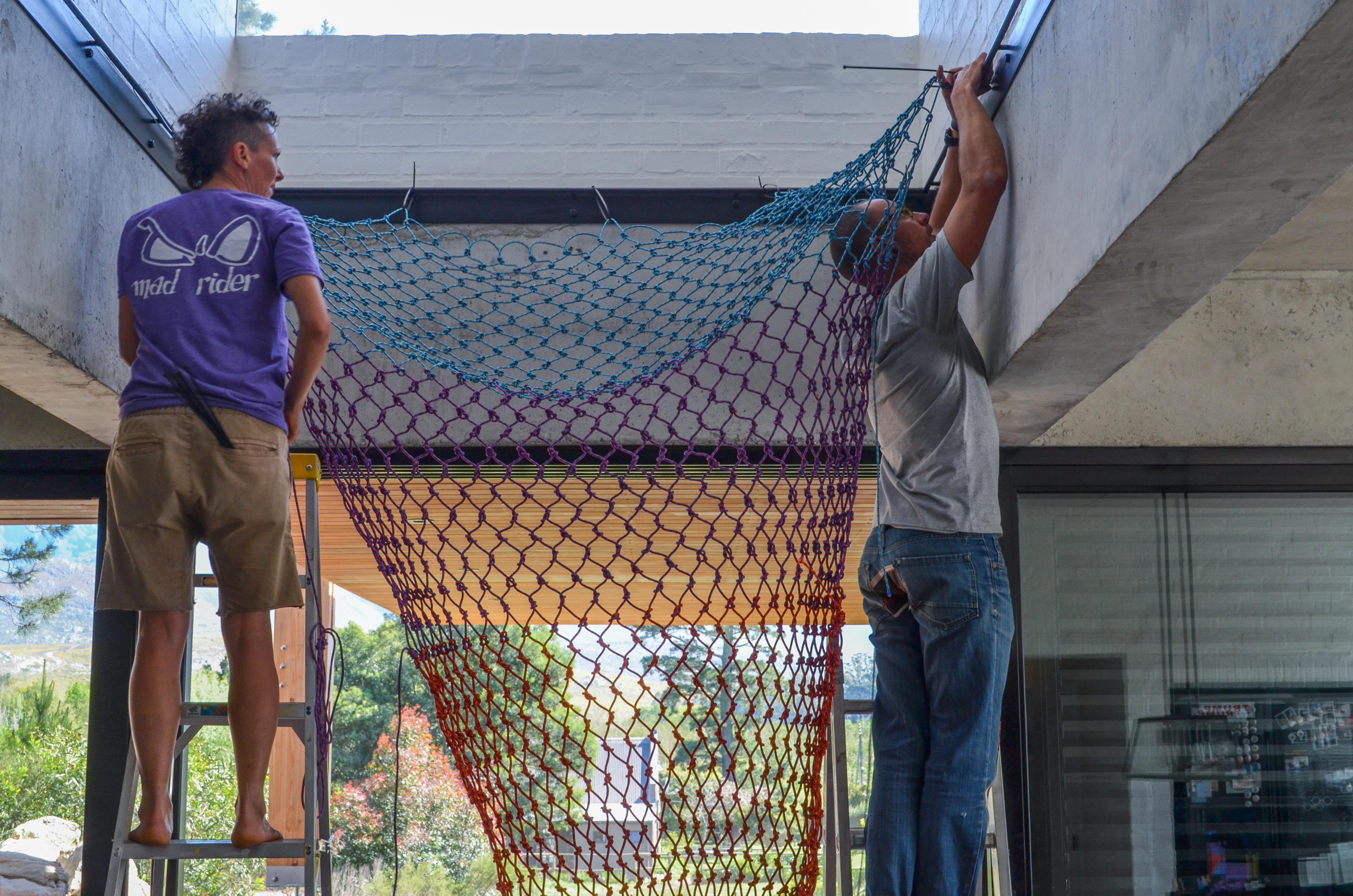 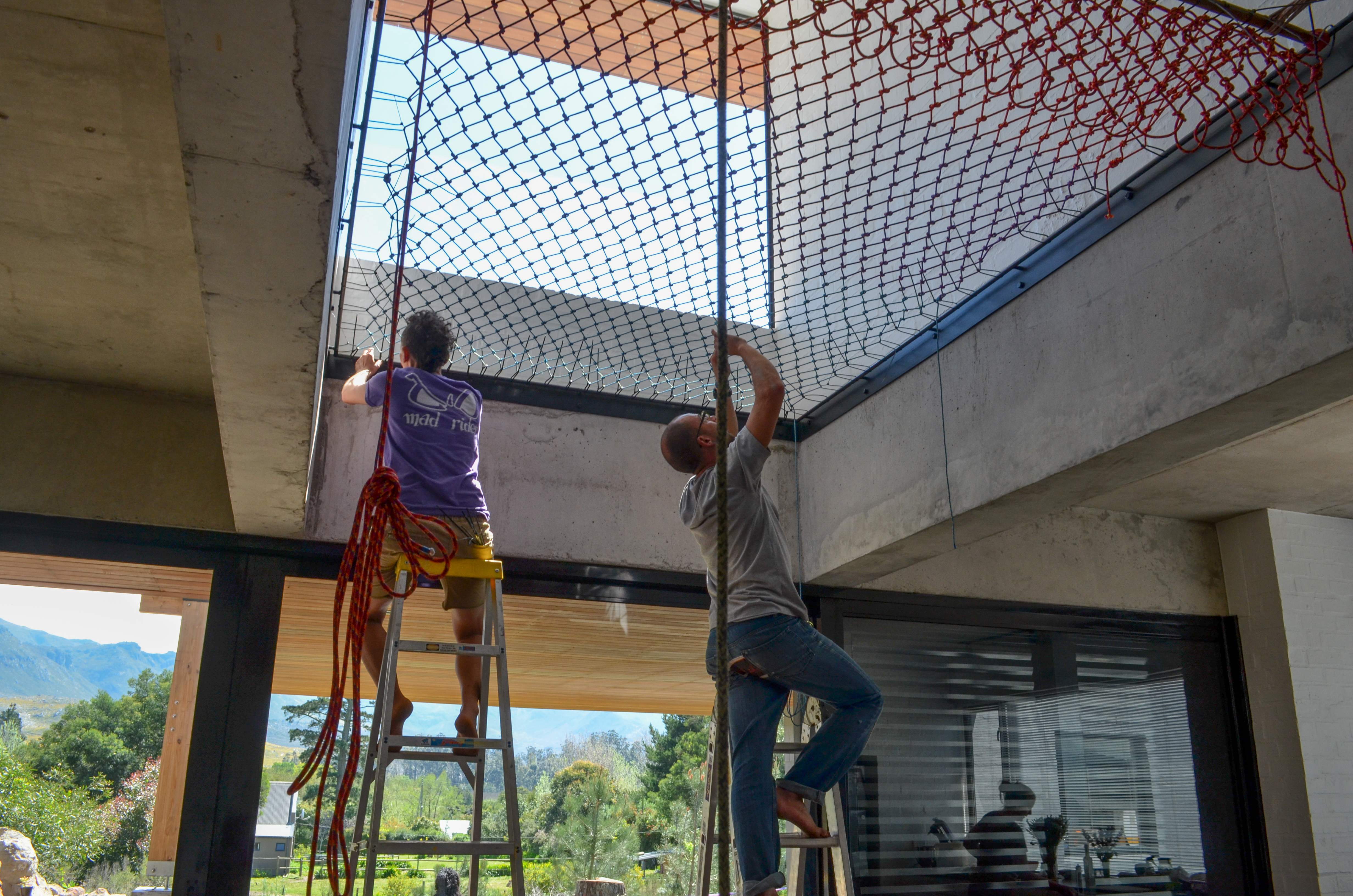 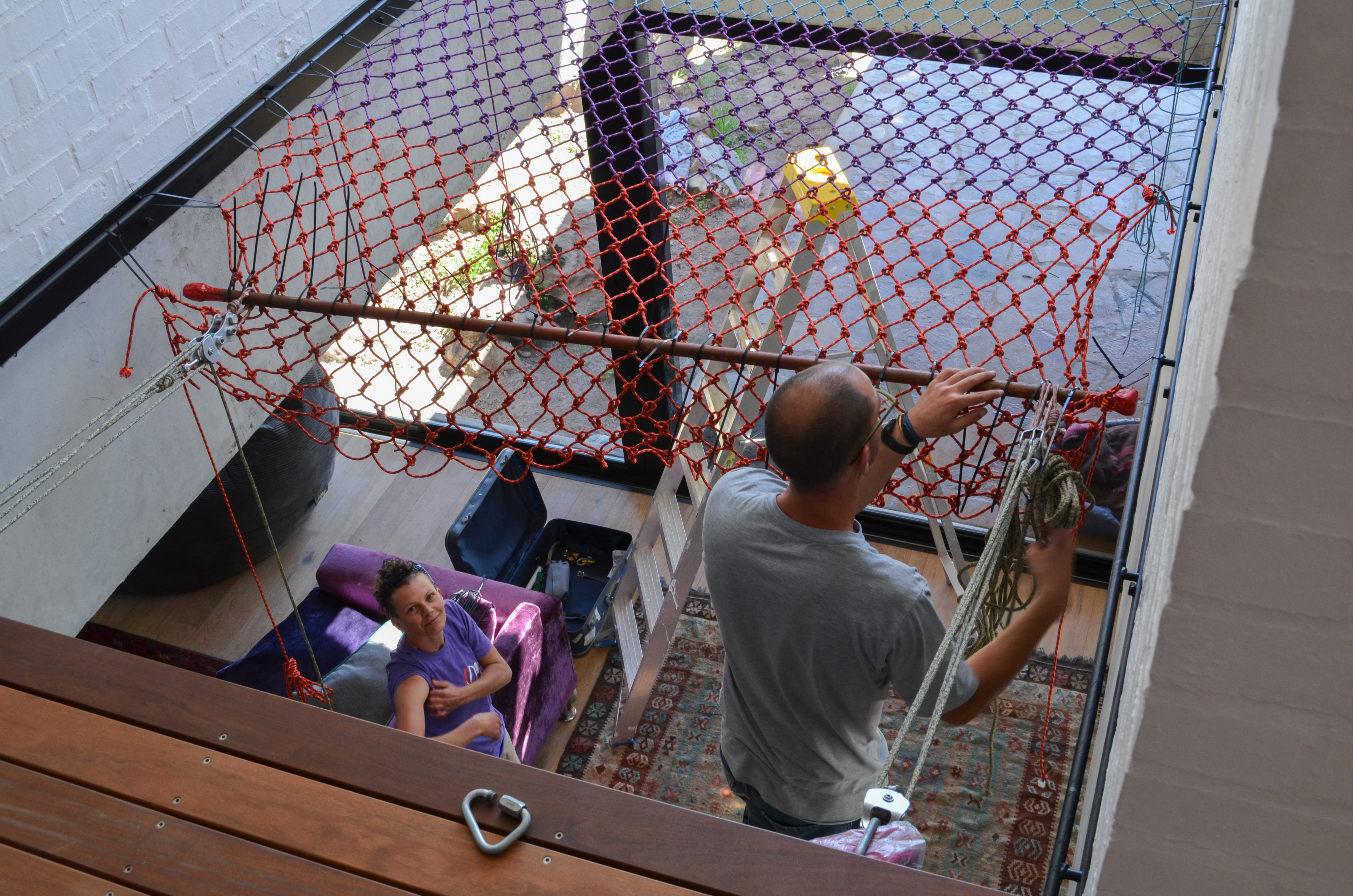 Upon return, progress proceeded, and we hauled in a fair amount of the net – but not nearly enough. I attached the far short end with rope to alleviate the cable ties when they started popping under the tension. At this point we had a delicious lunch to ramp up our motivation and energy, strong coffee included. Things post lunch moved along slowly yet methodically. We de-tensioned and re-tensioned, to get the long edges roped up and in place. We de-tensioned again, this time to adjust the pulleys as they had run out of distance to pull in any more. We got to the final tensioning act, and the net was almoooooost to its full distance. We made a call to attach it with rope anyways, with longer spaces. The reasoning behind this was so that we could hop onto the net and hopefully stretch it in and set all the knots – anticipating we could eke out a wee bit more distance from the net. Well, that seemed to work! We re-tensioned the two long sides, and set about the task of hauling in the final edge. Completion was nigh! 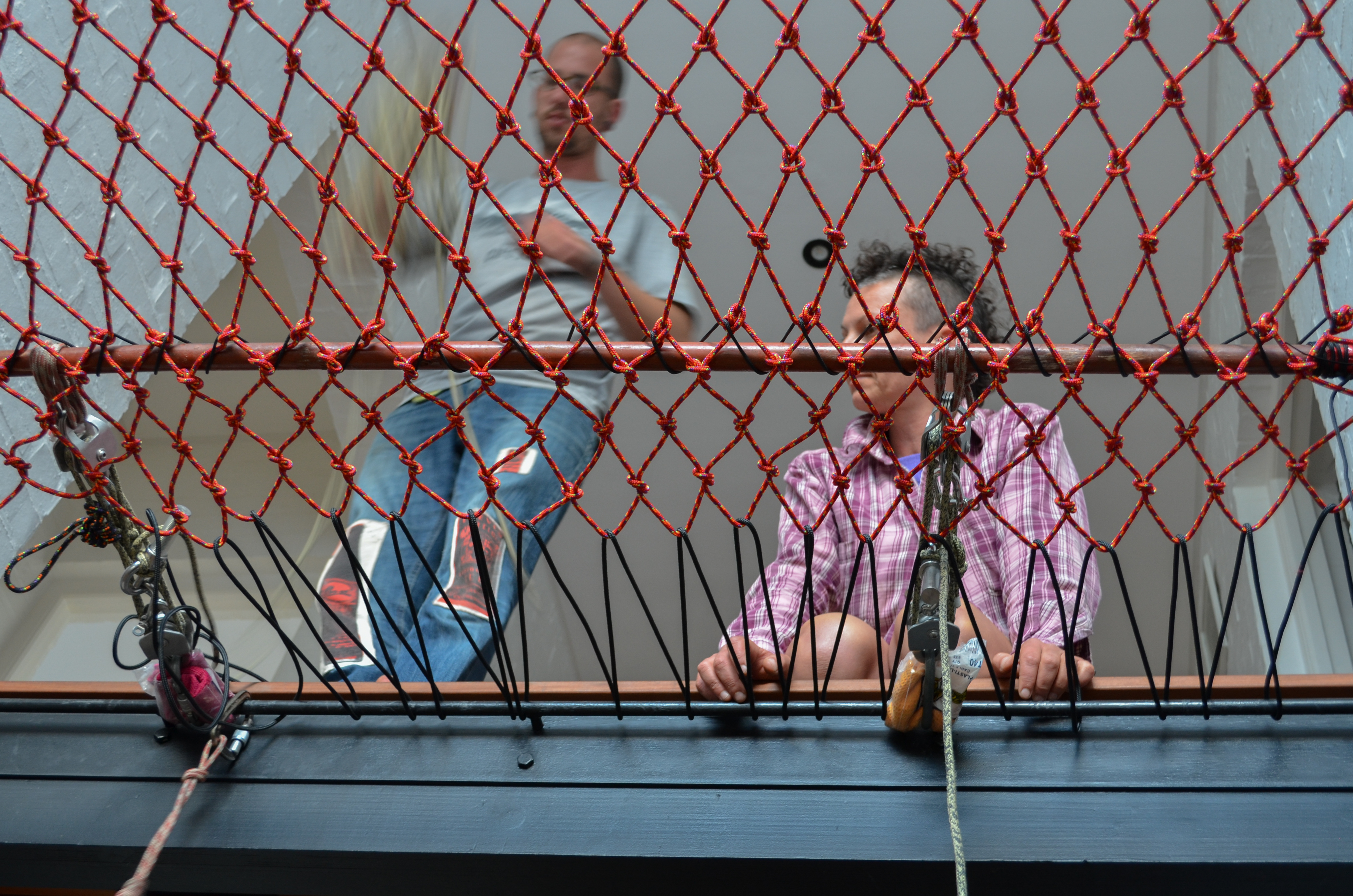 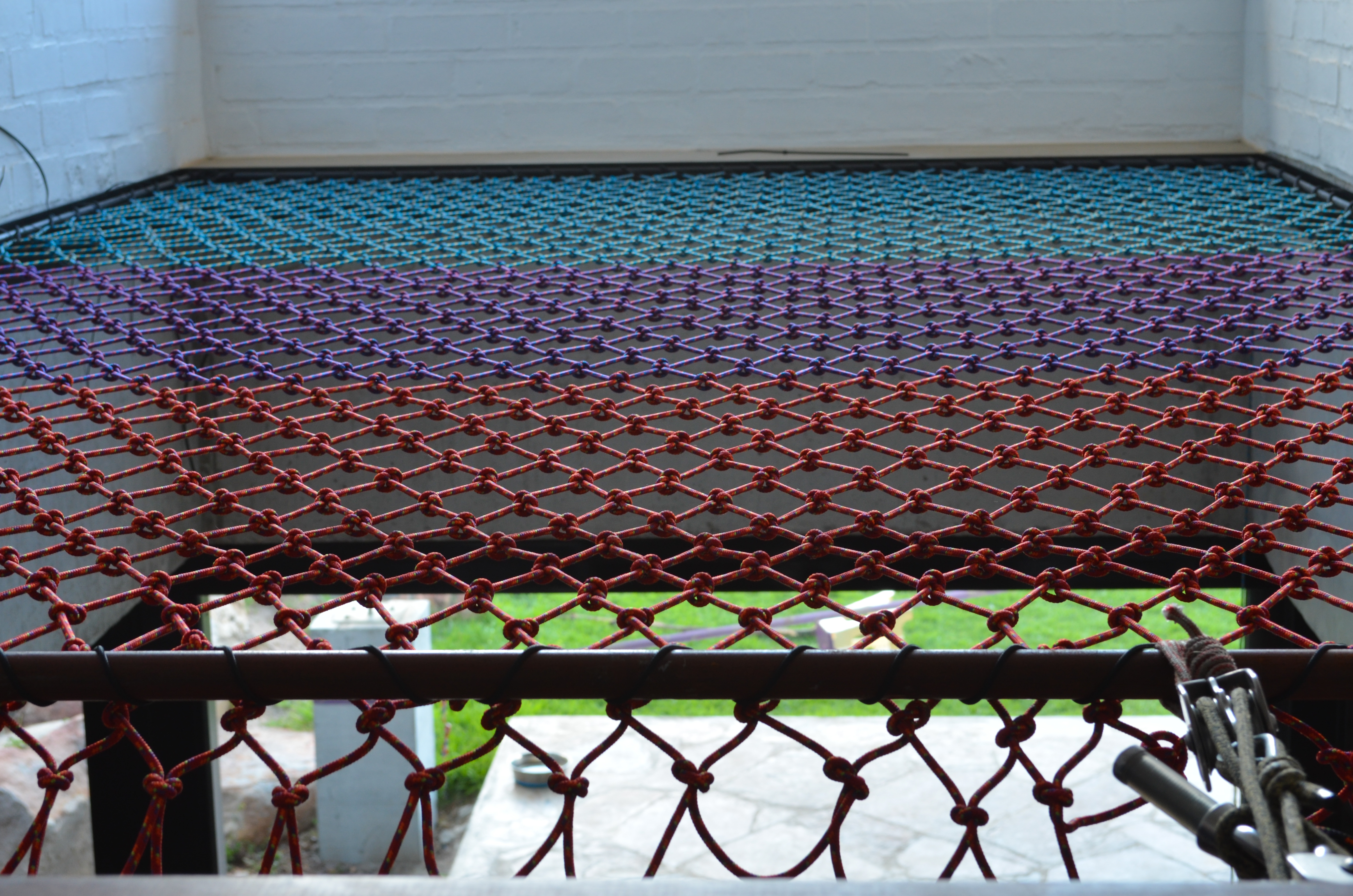 By some miracle, we managed to get the net to the other side eventually. It looked truly magnificent. Borderline biblical. Joseph’s Techni-colour Spacenet. After a frolic on the net and some celebratory pictures, we pursued our odyssey home at the ungodly hour of 7.30pm. That made for a 12 hour round journey. But longer than this physical journey was that of the entire net’s construction. I learnt a lot from it, both in terms of rope work and about myself. Patience. Methodical planning. Perseverance. Etc. Etc. 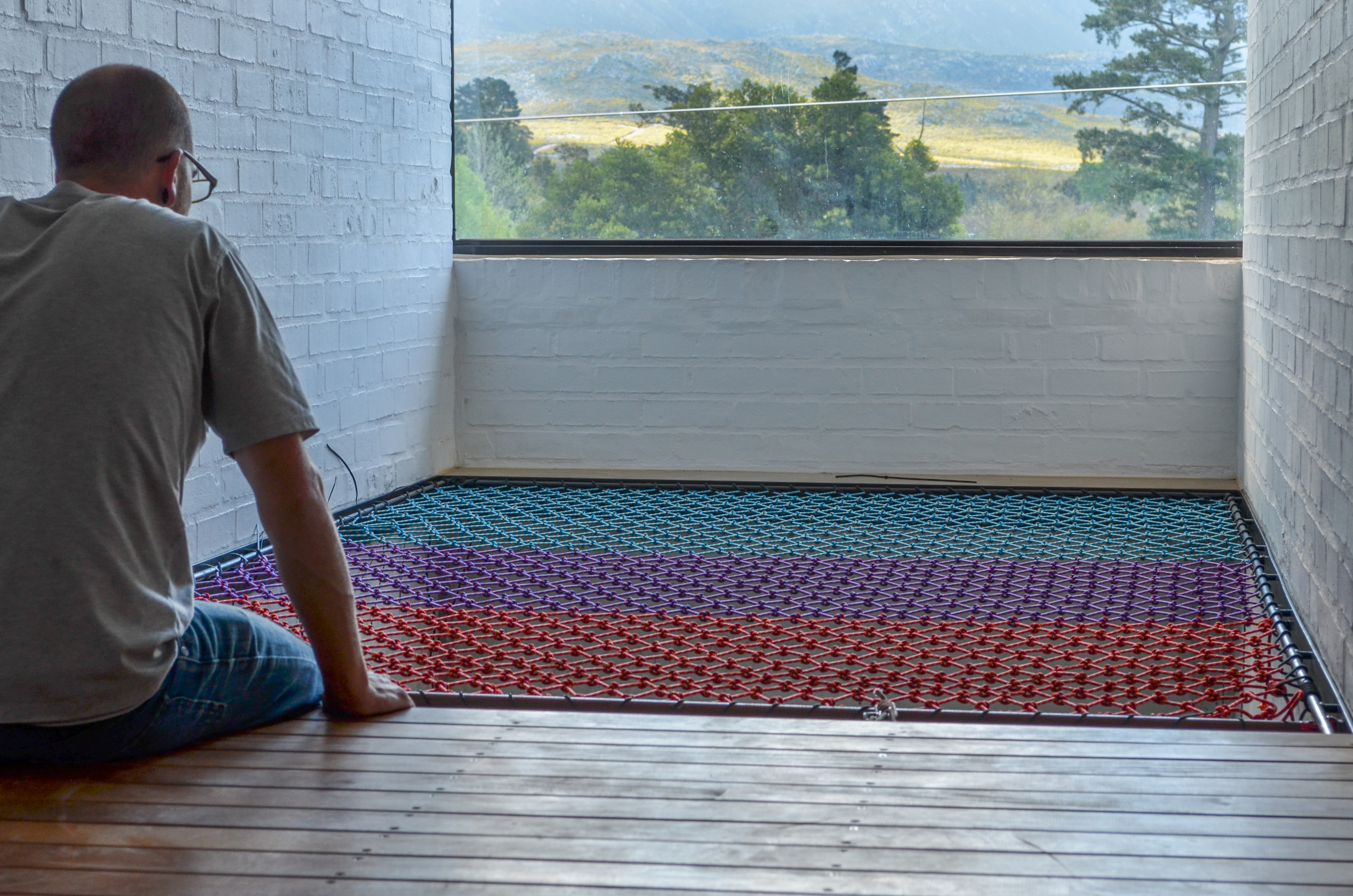 As happy as I am that the net is successfully constructed and rigged, I was a little sad to see it out of my hands. My calloused hands. But hopefully I shall return to Grabouw sometime in the future for a luxurious afternoon nap on the net – no weaving allowed!