I spent the three days before the highline festival in the southern Cederberg hiking with my family. I wondered why it was that I was feeling a slight apprehension towards arriving at the festival on Friday. I have subsequently come to realise that a large reason for it was a slight trepidation towards the actual rigging of the highlines. I am passionate about rigging, and enjoy the process to a large extent. However, the vast majority of my rigging has been done under the guidance and supervision of Sylvain Burki. As many in our community may know, Sylvain tragically passed away late last year. Sylvain was also the creator of the Rocklands Highline festival some three years prior. The notion of rigging without his extensive knowledge and guiding hand seemed somewhat intimidating and unappealing to me. That combined with very irregular highlining in the past year was not a great combination to motivate me.

Well Friday eventually rolled around, and my sister and I rolled into the dusty camp of De Pakhuys in my rattling Toyota Yaris. I had barely set foot out the car and was already unravelling a few hundred meters of webbing and sorting gear into my pack to head straight up to the highlines. Kyle Pratt, Burghen Siebert and Jeff van Breda amongst others had already done a stellar job of doing the preliminary rigging of the vast majority of the lines. Andy Court and I were the new old-hand riggers on the block that morning, and we set about finalising the lines with the others. 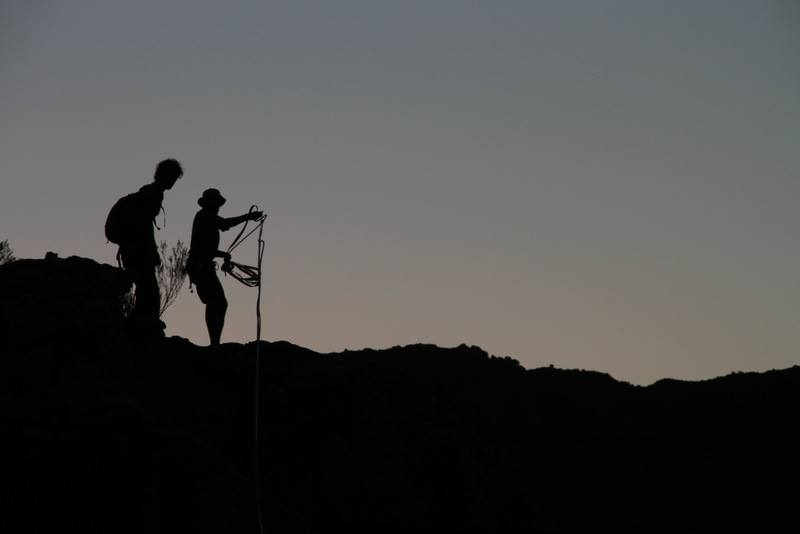 By the gentle glow of late afternoon light, the lines were all successfully rigged, and walking ensued. Immediately it was noticeable the increased number of people at the festival, and more so the huge increase in people successfully walking the highlines! The jarring whip of a highline as someone took a leash fall interspersed the relaxed chatter along the sidelines, invoking spectators to rubber-neck at the downward spiral. To see friends that seriously struggled to stand up on a highline in previous years now send lines with ease and finesse was a truly wonderful sight. Likewise to see new faces appear out of the woodwork and share with them the intricacies of highlining was deeply gratifying. The psyche of a fresh send is contagious and stoked my fires to give the lines a burn. I did not have serious inclinations to send my project from last year – the 45m highline – but nonetheless had a wonderful time giving it some proper attempts. 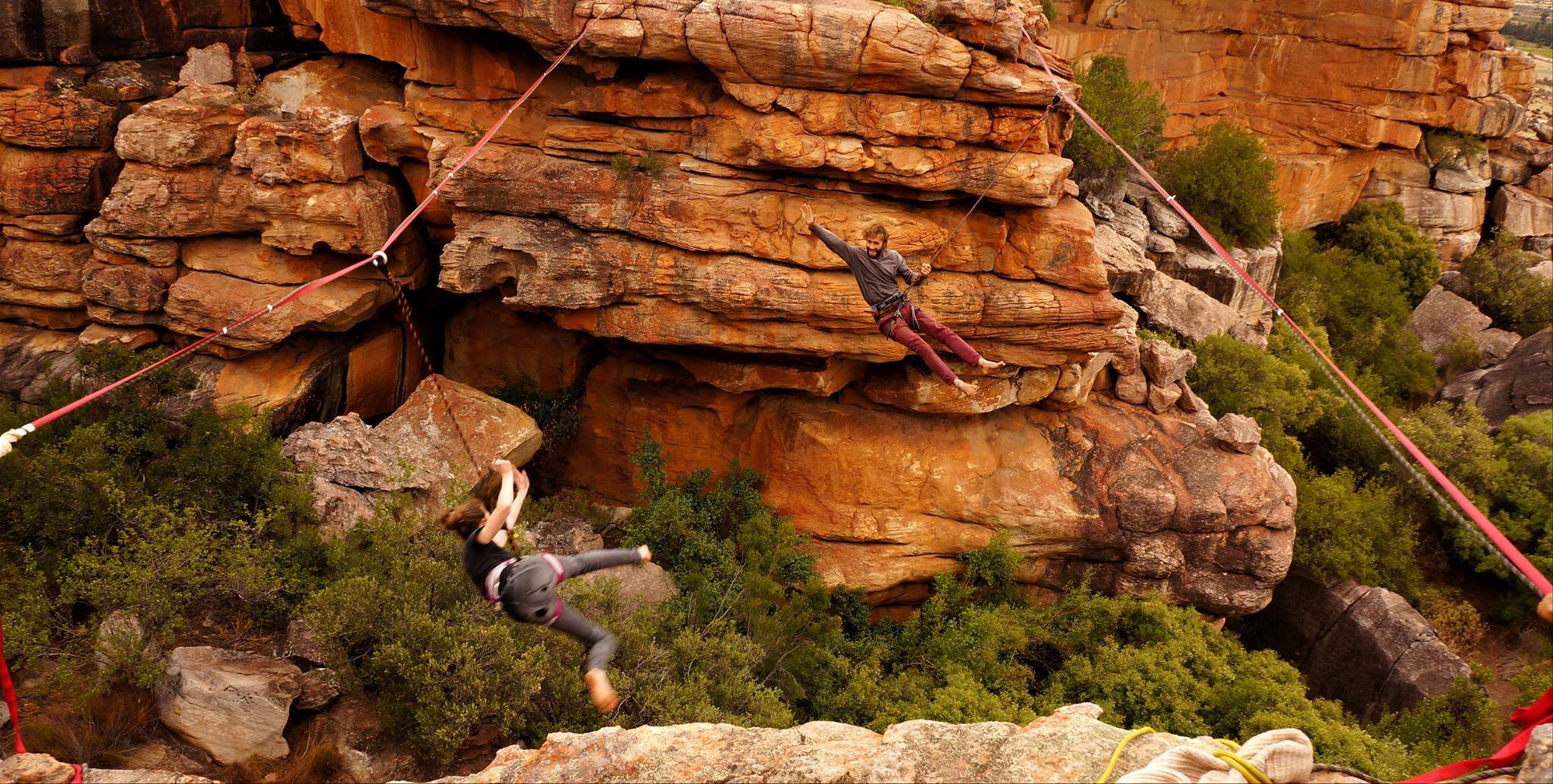 It was also great to see those with a different talent integrate it on the highlines, such as Toni performing her lyra and vertical silks skills up high. It just goes to show that with a creative mindset there are endless possibilities! 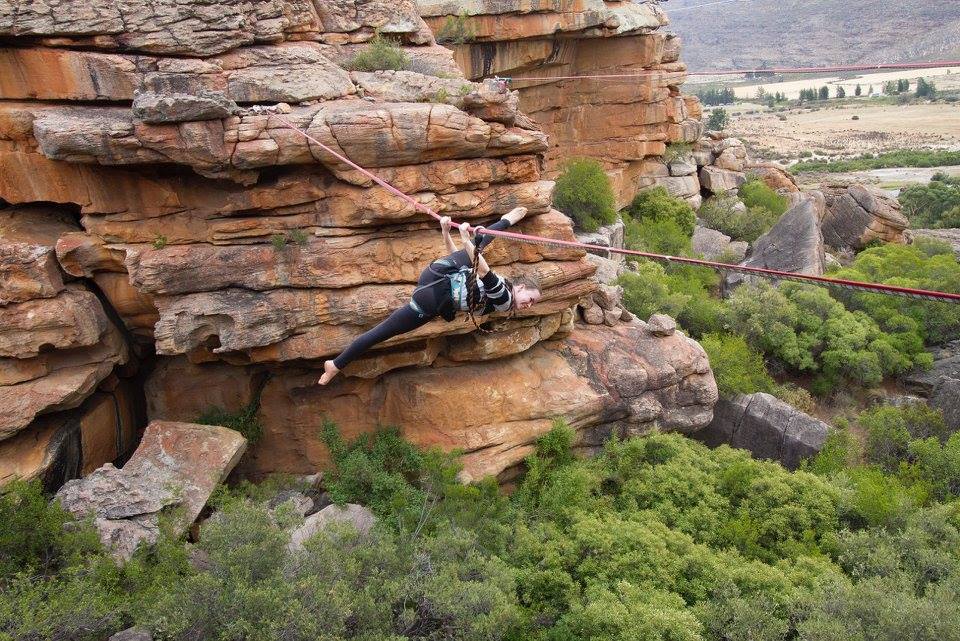 On both Friday and Saturday night Karma played her unmerciful role when I spent a soggy night in a friend’s very unwaterproof tent to pay my dues for being too lazy to set up my own tent – which is very well waterproofed! The rain cleared up with the sight of the rising sun both days though, and conditions for highlining were quite ideal (we don’t dissolve like an Aspirin in a bit of drizzle like boulderers do).

As similar to previous years, one of the great beauties of the festival was the diversity of activities on offer for all. It was somewhat inconsequential if you weren’t a slackliner let alone a highliner, there was something for everyone to share and get involved. During the day juggling, unicycling, POI, acro-yoga, miniature bike riding, heavy chilling (yes, that is a legitimate activity) and a number of other shenanigans were undertaken. Few due to the weather braved the waterline, and those that were brave enough were generally spat off into frigid water in an unceremonious fashion!

Whilst I bustled into my warmest attire and cursed the imminent winter in the evenings, the boulderers amongst us were at the point of nigh sexual arousal by the friction conditions for this time of year. Self-proclaimed as official moral support and spotter I provided superior beta insights and safety marshalling for those with a fetish for wrestling pebbles.

On both nights Caitlin Louise instigated fire jams after dinner. The night owls’ talents of fire staff, POI, ropes and fans were on display to the accompaniment of drums and didgeridoo. Andy Court gave a wonderful debut fire breathing performance, keeping the crowd with baited breath as he taunted his facial hair with a firey trim.

It was inspiring to see Kai and Rogan Samuelsson (10-and-three-quarters and 7-and-two-thirds years old respectively) heading out for a zipline across the highlines, and I noticed their keen enthusiasm and rapture over the entire experience. Later that evening I caught up with Kai around the campfire and was delighted to hear that he was keen on progressing his slacklining with the aspiration to possibly attempt highlining the next year. It is this kind of young enthusiasm that will take South African slacklining and highlining to the next level. 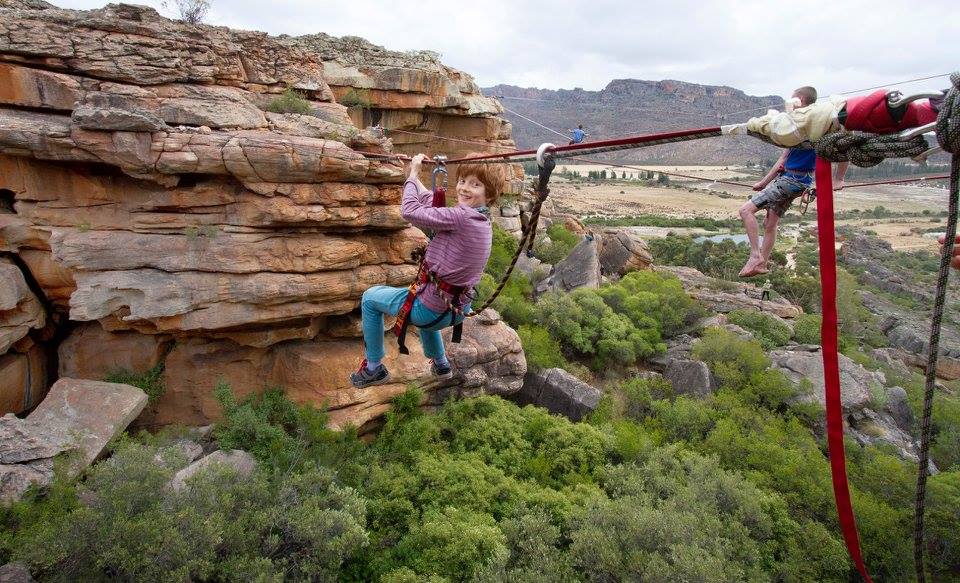 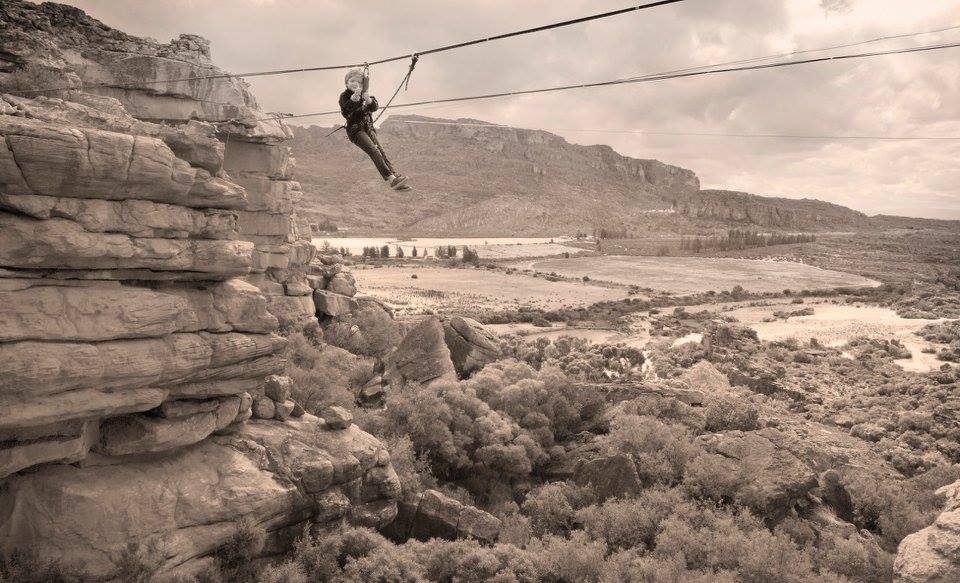 Although it was definite to myself and others that were close to Sylvain that his absence in the hills was present, it was still inspiring to see the community come together, and hopefully see its further expansion in the future. We have had the pleasure of visiting American Bria Shurke returning to our festival, whereby she deemed our festival both the most welcoming community and safest in terms of rigging. This came as quite a compliment as she has attended numerous international highlining festivals!

The owner of De Pakhuys, Thys Kruger, installed a beautiful plaque in memory of Sylvain at the entrance of the trail leading to the highlines. Thank you Thys, for both your hospitality and empathy. 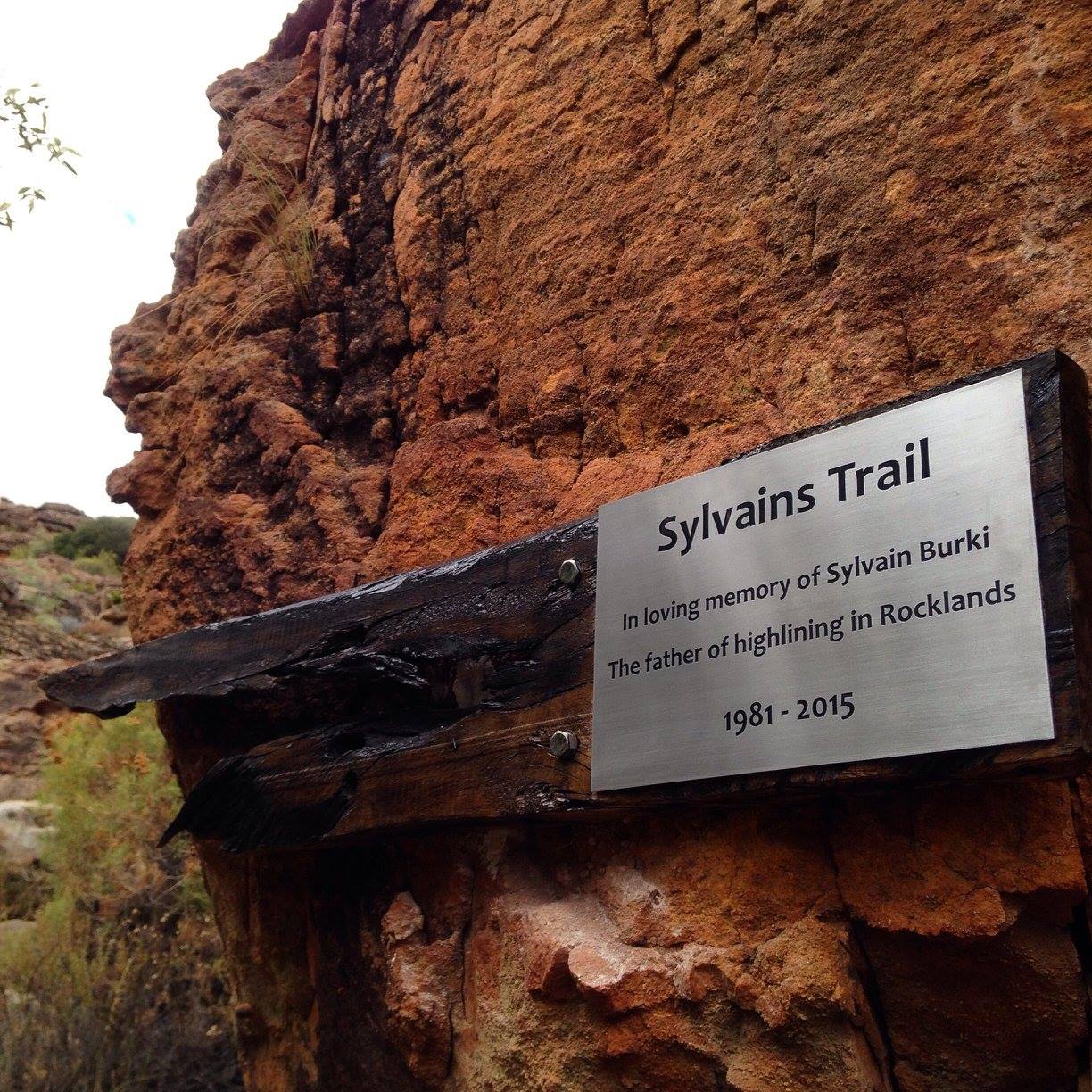 By Sunday I was beginning to walk like a cowboy from one too many catches on the highline; my inner thighs aesthetically resembled an abstract artwork in pink, blue and purple hues. I was battered, dusty and ready to head homewards, but ultimately highly satisfied with a lovely time out in the magical Cederberg.

Thank you to everyone, from those that helped organise to the bystanders, who all made the event a beautiful experience. In particular, a massive thank you to Charmaine Retief Kritzinger for continuing with the organisation and management of the highline festival in true style and finesse this year, all in attendance deeply appreciated your hard work! 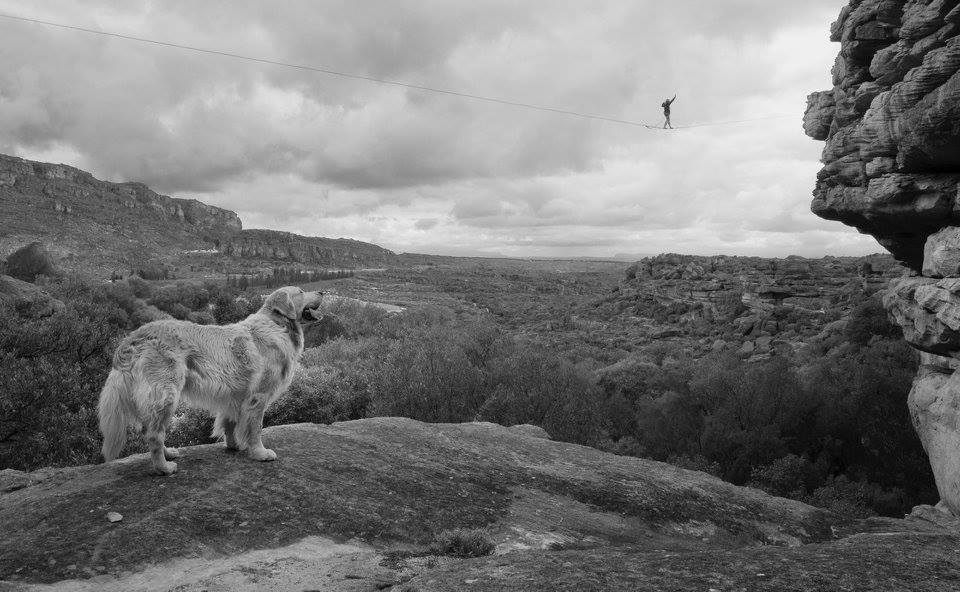 Harry the hound taking in the panorama – Peter Samuelsson 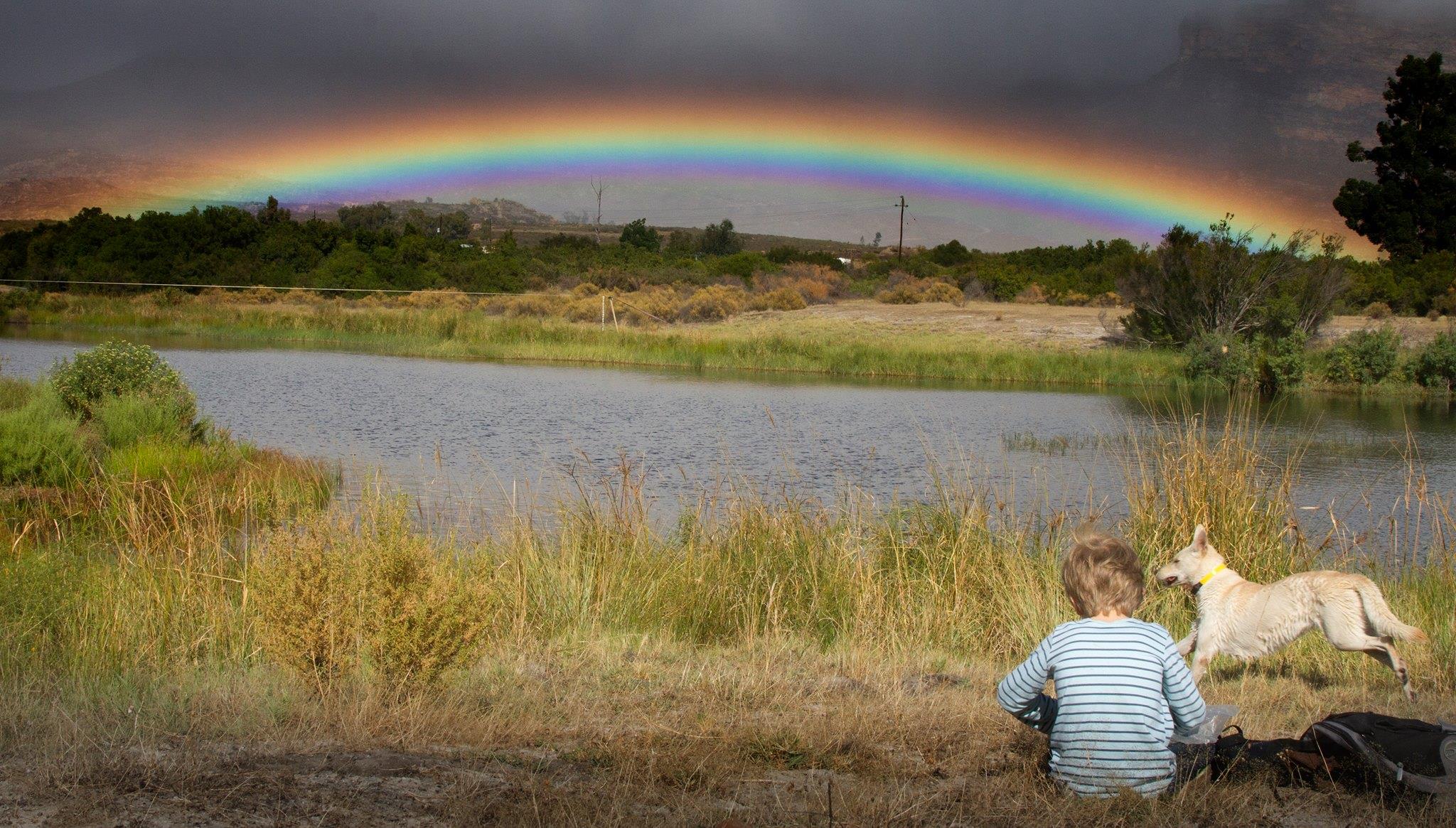 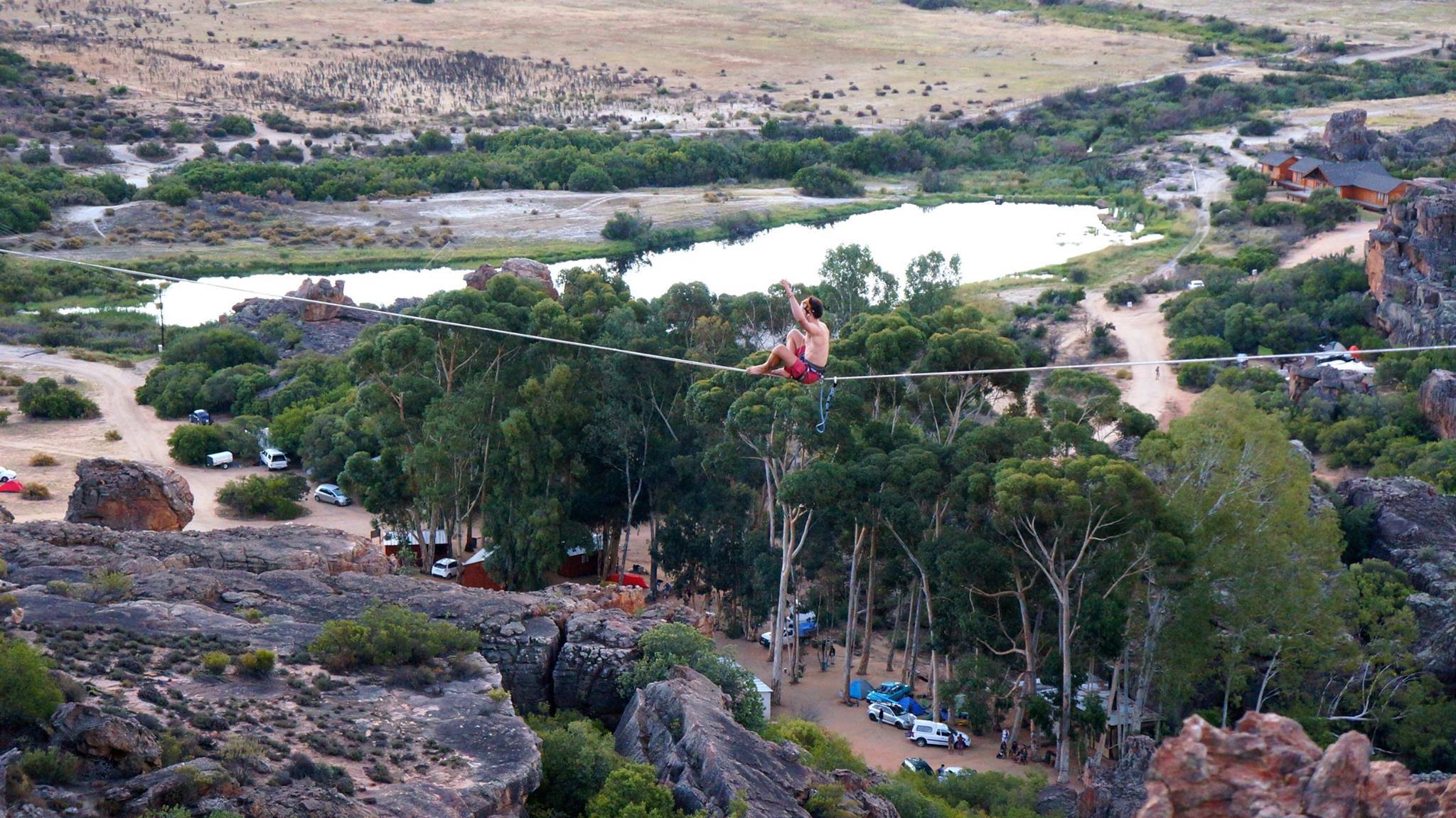 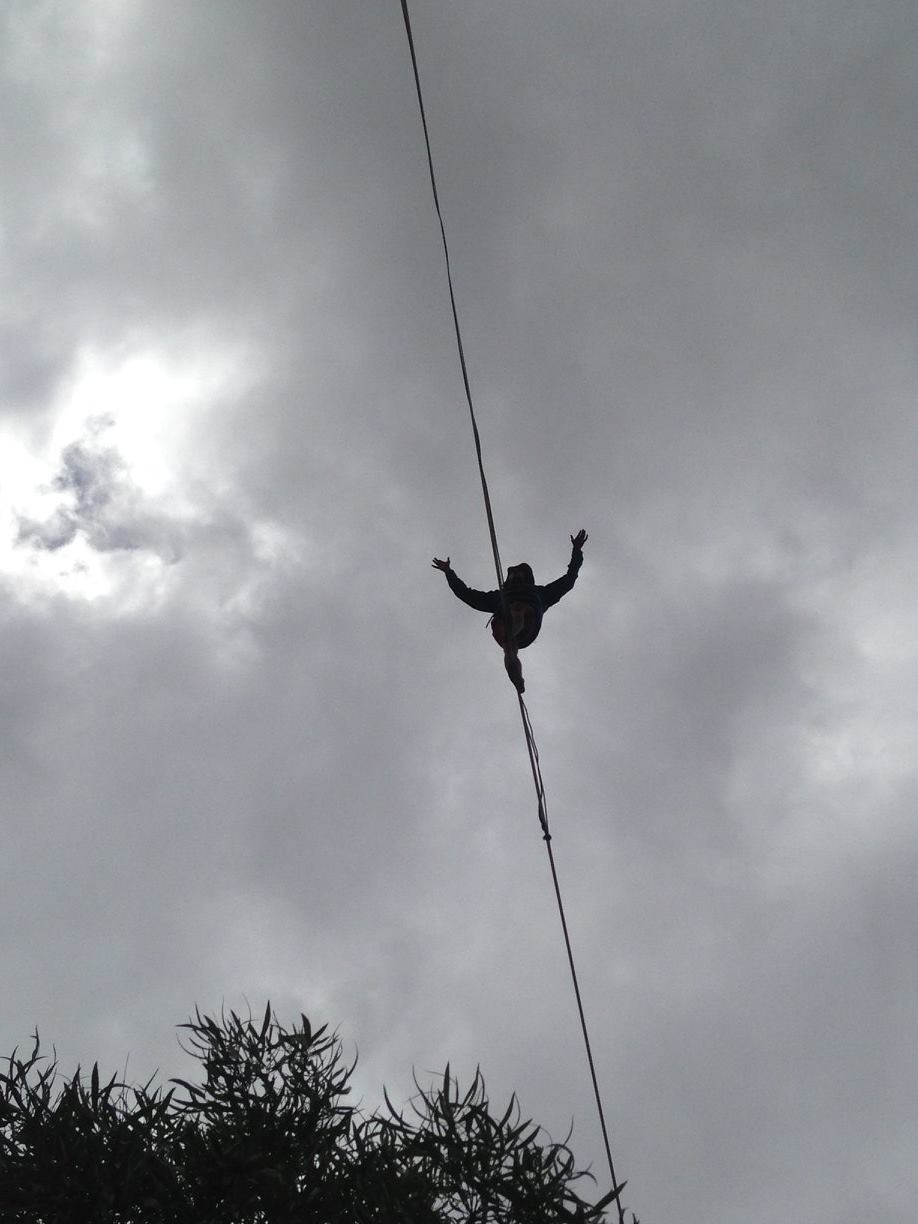 Flying with the birds – Donna Kisogloo