Last year I promised that if I did a sub-3 Shova on my road bike I would do it this year on my unicycle. When I snuck in at 2:57:10 I was elated … until I remembered my promise, and suddenly a bit of angst set in.

I roped in my good friend and fellow unicyclist, Shaun Murphy and together we set our minds on the challenge of doing the 2016 Tsogo Sun Amashova – 106km from Pietermaritzburg to Durban. We contacted the organisers to see if they would allow such madness on the course (secretly hoping they would say no). Not only did they allow us, but they went out of their way to accommodate us and the cause we were riding for, auSOMEtism.

And so it was that Shaun and I found ourselves on the start line outside the Pmb town hall at 06h35, 10 minutes ahead of the pro/elite group, staring down an open piece of road with the daunting task of 106km ahead of us. 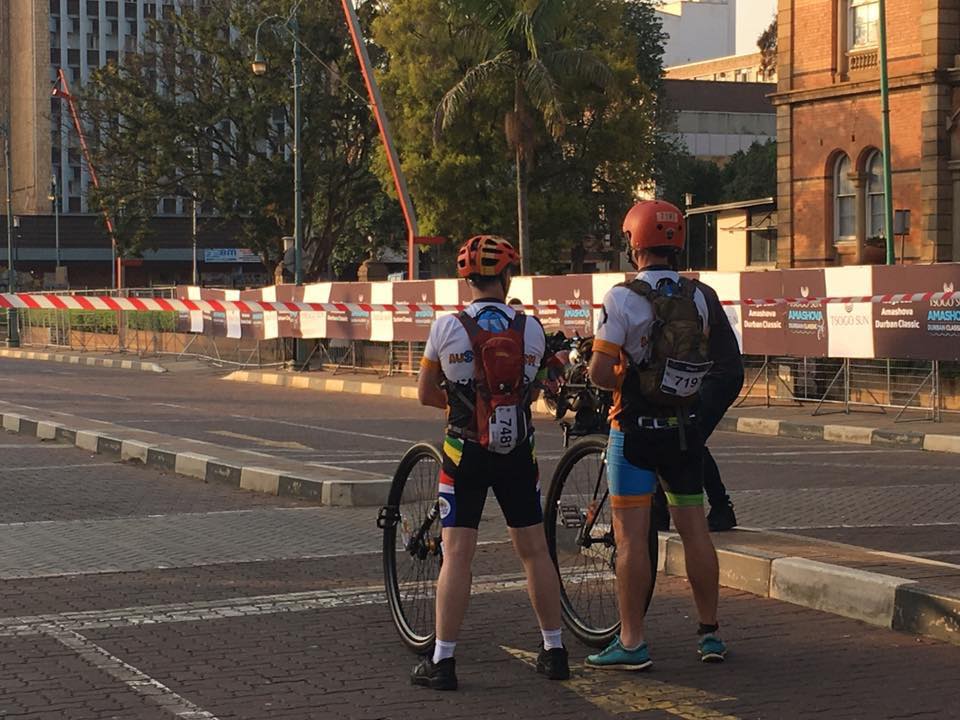 I haven’t mastered the art of launching the 36” wheel properly and often need 3 or 4 attempts to get going. The added pressure of TV, photographers, announcers and all the pro’s looking on was a recipe for an epic fail going viral on YouTube. My BMT shone through and I mounted the Yardbird like a boss. 1st attempt and I was rolling.

For about 10km the Shova was officially led by two unicyclists. Once over the big F-word; Fox Hill – a 13km climb designed to hurt a unicyclist, I got into cruise mode and was making excellent time all the way to Cato Ridge – and then the wheel came off. Something jammed my brake and one moment I was cruising at 22kph, and the next instant I was flung on the tar like a child tossing a rag doll in a temper tantrum. Bruised, bloodied and a bit shaken, I never quite regained my rhythm or confidence. My disk brake was not working quite as well as it could have and I still had the downhills of Drummond, Botha’s and Field’s to negotiate. None was easy.

It was never going to be a walk in the park and the last 20km proved to be very challenging. The wind had picked up by the time I hit the city bowl and the swirling gusts between the buildings almost undid me again. It was great having my son Rivers come riding out to meet me at Tollgate bridge and keep me company for the last couple of agonising kilometres.

Crossing the line just shy of 6 ½ hours to the applause of the crowd lifted the spirits and then discovering that the whole East Coast Cycling Club had waited for me to arrive at the hospitality tent was especially touching. Shaun had his own tales of attrition as he battled through loose cranks, cramps and saddle vs buttocks to finish in 7:08.

It’s amazing how quickly the thoughts of pain fade, only to be replaced by the awesome moments of African life captured in the indelible film of ones memory;

If you would like to donate to this worthy cause go to www.ausometism.co.za