Another beautiful day in the Berg! Another day of work as an OddWheeler. I stroll down the road for my morning coffee and then meander into the office. Open my computer to start my daily duties. On this particular day I started on Facebook because I wanted to upload photos from Sunday’s Park Play Session, which I still haven’t done. I did a quick scan of my feed and come across a slightly disturbingly vague post which immediately prompt me to phone Charmaine, the partner of my friend Sylvain.

The news was devastating and tragic!  With barely anything being said, the tone in Charmaine’s voice had confirmed my suspicions. Sylvain was gone!!! He has left this earthly realm.

After dealing with the death of my father I thought that I would never be wobbled as easily again. However Sylvain’s death affected me. He would be the first friend to cross over.

The easiest way to explain why I was wobbled is by telling you what our connection was….

Both coming from the Film Industry, Sylvain in Stunts and Rigging and myself in Wardrobe / Costume, our paths crossed on a commercial shot in Noordhoek. In true Cape Town film style it was a service job for an American product. The commercial was a bootcamp vibe. I remembered walking across the massive field towards Sylvain. There must’ve been a Wardrobe / Stunt conversation that had to happen. This in turn lead to the discovery of him being into Slacklining, but more specifically Highlining and that he has a company called SlackGear and that he makes lines. Obviously my hobby and new sideline business, OddWheel Unicycles was unveiled to Sylvain. I was a Unicyclist and I had a company that specializes in unicycles but also sold slacklines. We had a kindred interest in balance and developing our communities and businesses. This was our introduction. 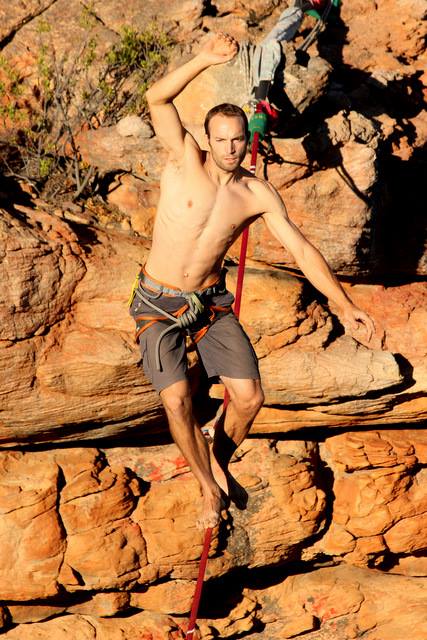 Today, after being out of the film industry for 1 full year running OddWheel full time. I find myself yet again on a film set in Constantia. Fulfilling the role of an Electric Unicyclist and not a wardrobe assistant. Waiting for when ‘they’ use me, if ‘they’ use me. The circus I left behind to pursue happiness and be apart of a real circus community. With ample time to kill I am writing the start of this post on my phone.

Since taking OddWheel over I had to explore ways of making this business viable as it could not survive off Unicycling alone, one of the hardest balance arts to master. It takes a strong-willed individual with a mindset that invites challenge coupled with perseverance, as does Highlining, Longlining and Slacklining.

This exploration led me on a path to connect with the communities that embrace this way of life. We are a vast pool of communities spread over many arts which collectively are the Balance / Flow and Cirque Arts. The circus I feel most comfortable in and welcomed!

Sylvain and myself by default are leaders in the balance aspect of this collective and worked together and singularly to grow, connect, teach and inspire these art forms. What sealed our connection is when Sylvain invited me to the first Rocklands Highline Festival in March of 2014. I leaped at the opportunity to connect with this community and this phenomenal man. The crossover is perfect and continues to work. Without realizing it, attending the first Highline Festival made a huge impact on my life and it’s path. Sylvain was an integral part of my current path.

In the weeks that followed I attended Sylvain’s very small and intimate service where he was cremated. I saw the pain and heartache that his closest friends and family were experiencing. It was so familiar. December came and went. On January the 23rd, 2016 I attended Sylvain’s Celebration of Life at the Swiss Club in Green Point. There were so many people! It was casual, light, heartwarming, emotional and tear jerking. Sylvain’s closest friends and family spoke of his wonderful life. It was beautiful to hear the antics of Sylvain Burki, as a boy, as a brother, as a son, as a musician, as a climber and as a highliner. Echoing the attitude Sylvain lived his life by, always smiling, laughing, teaching, sharing and giving. He lived a full life, not a moment was wasted. Everything he did was to the best of his ability, to perfection and of the highest quality. James Taylor edited a beautiful video of Sylvain’s moments that were either captured on video or as photo’s and the soundtrack was Sylvain playing the didgeridoo and guitar. It was a day of healing for the people that Sylvain had left behind.

But we couldn’t end it there. I still wanted to honour Sylvain’s memory. Around April / May 2015 I went to a gathering at Keurboom Park that Sylvain had arranged. It was a day of playing in the park with our toys. It was so much fun to be in that world again. I chatted to Sylvain about setting up a Facebook event that would happen once a month; this was to become Park Play Sessions. Our first official session was held in June 2015 and continued month after month. I actively invited as many communities that fell into the balance / flow / cirque world’s. Every Park Session is awesome with so many talented individuals coming to play, share and teach. It got big quickly and is now frequented by Slackliners, Jugglers, Unicyclists, Yoyoist’s, Acroyogi’s, Aerial Hoopist’s, Poi, Staff and Hoop people. I didn’t know it at the time but the PPS held on December 13th would be the last time I hug Sy. He died on the 14th from a shallow water blackout in his pool at home. Damn shame!

I thought long and hard about what could be done to honour Sylvain’s memory. I asked as many people as I could for advice. It needed to include the community that was birthed through Park Play and Slackgear. After Sy died photo’s started circulating of him. Craig Fox had taken a photo of Sylvain bouncing on a small spacenet that himself and Andy Court had built at the October PPS. I spoke with Charmaine, Andy, Mr Dicks and Lyle to bounce my idea off them, “Let’s build a giant spacenet for Sylvain”. Admittedly it didn’t take much convincing, we were all in agreement and therefore it will be done.

A good old Whatsapp group was formed to start figuring this brain fart out. Gear was discussed numerous times. We did a little test build 2 weeks before the January session just so we knew what we were in for. We felt pretty confident that we could pull it off… and did we!

Sunday morning, it’s Park Play day, no it’s spacenet day! Chris and myself arrive at a sparrow’s fart whilst the rest of the team starts trickling in from 9am. We were a core group of roughly 10 people that started actioning the build. As the minutes ticked past we continued to weave Sylvain’s dreamcatcher. Sessioners trickled in and got involved. People helped where they could. The result was exactly what I had hoped for. Sylvain’s friends gave their time, energy and gear to manifest something as grandeur as he was. We collectively created a heart space that held his very essence. It was filled with fun, joy, laughter and love. Like I said, exactly what I wanted!

I will openly admit that I know next-to-nothing about climbing and rigging. I’m the unicycle expert. What I can do is give you a brief idea of what it took to build Sylvain’s Spacenet.

Here is a photo album of the day on Facebook.

Something that really touched my heart about Sylvain’s Spacenet Send-Off was that both his parents, Hedi and Ernest came to the park to enjoy the community that Sylvain had helped create. It has been a difficult time for them wrapped up in intense emotion. Hedi and Ernest, Sylvain was amazing with so many incredible qualities that could only be attributed to the both of you. He was a precious gift. I feel overwhelmingly honoured and spoilt to have known him for the short time that I did.

Sylvain you rocked our worlds! Thank you for being an inspiration to us all and for teaching us so much! Dude, you will be missed… but never forgotten!

Just so that everyone is in the loop, SlackGear will continue. It has been kindly handed over to Charmaine Retief Kritzinger who stood by Sylvain’s side for the last few years as his partner. She pretty much shadowed him and I would imagine knows the smallest details about SlackGear that only a partner would know. We support you on your new path Charmaine, unquestionably. Go for it girl! 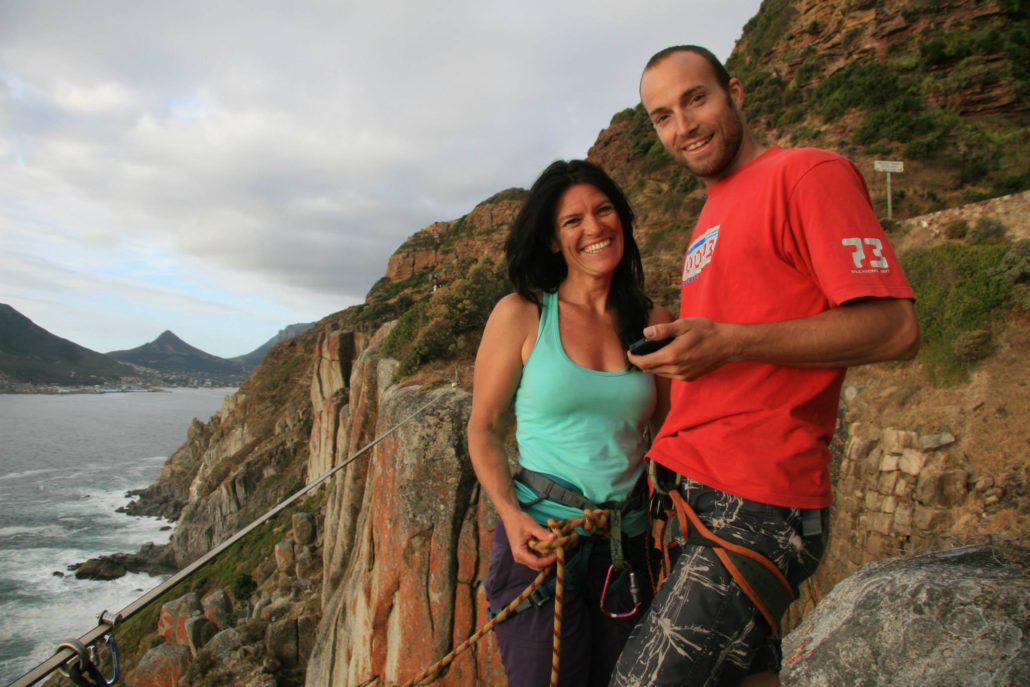 If you into Slackline, Longline or Highline then get your buttocks down to the annual meetup happening at Rocklands over the Easter weekend.  Click here if you would like to find out more about the weekend.  I would highly recommend it!