With corrections and slight elaborations by Donna Kisogloo. The core of Owen’s write up is rad as…. and I’ve tried to not interfere too much.

I’m a 14 year old who can’t live without his unicycle. I’ve been unicycling all by myself in Limpopo for about 6 months. I think the loneliness started getting to me so I went onto just about “the only” unicycle website I know of in South Africa, www.oddwheel.co.za. There I found my way to the events tab. After pages of events all saying location: Cape Town, I saw a picture of a rhino on a unicycle with the title: UniDaba 2012. This is where it all started.

It looked like it was a ball, even though the event was 2400km from my home town of Louis Trichardt. I was keen, super keen! I then spent the next few hours Whatsapping and posting on Facebook to find out if anyone knew if there was going to be another UniDaba? The next morning I saw a reply and from there onward the date, location and all the rest were organized!

About a year later, I was finding a way to fit a unicycle into a bag with all my other clothes. I did’nt know what to expect of UniDaba but from all the chirps and funny comments on the Whatsapp group I knew there would never be a boring moment and there wasn’t!

On the first day we kicked off early at the Bike Park on the Constantia Uitsig Wine Estate. This was my first time meeting everyone where I wasn’t asked, “Where’s the other wheel?”. We had an awesome morning rolling around the pump track and expert course of the park but then the competitive side began to surface. We separated into teams of 2 and fought our way through three laps of rocks, logs, drop-off’s and much more! 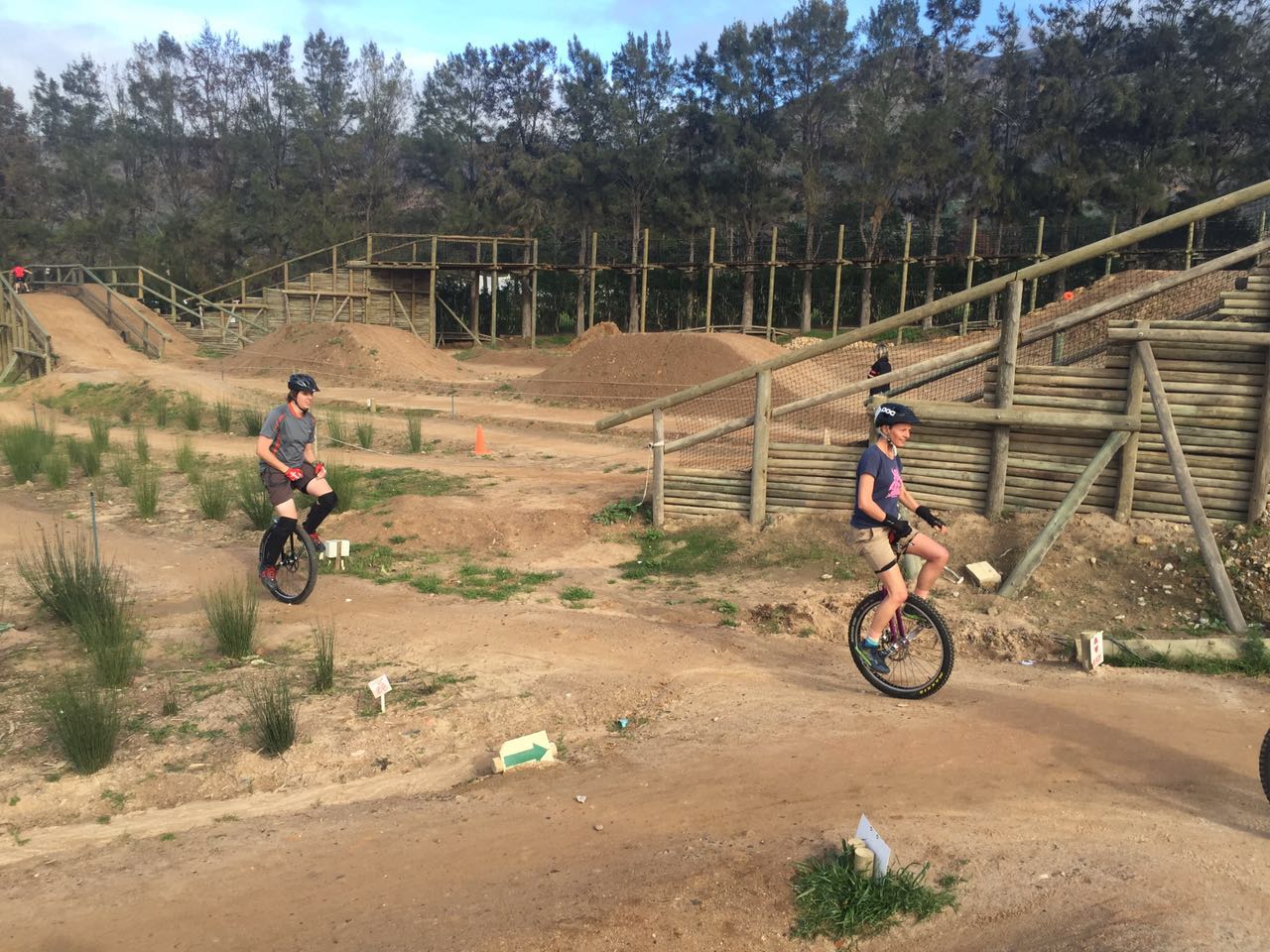 Lapping it at The Bike Park at Constantia Uitsig Wine Estate 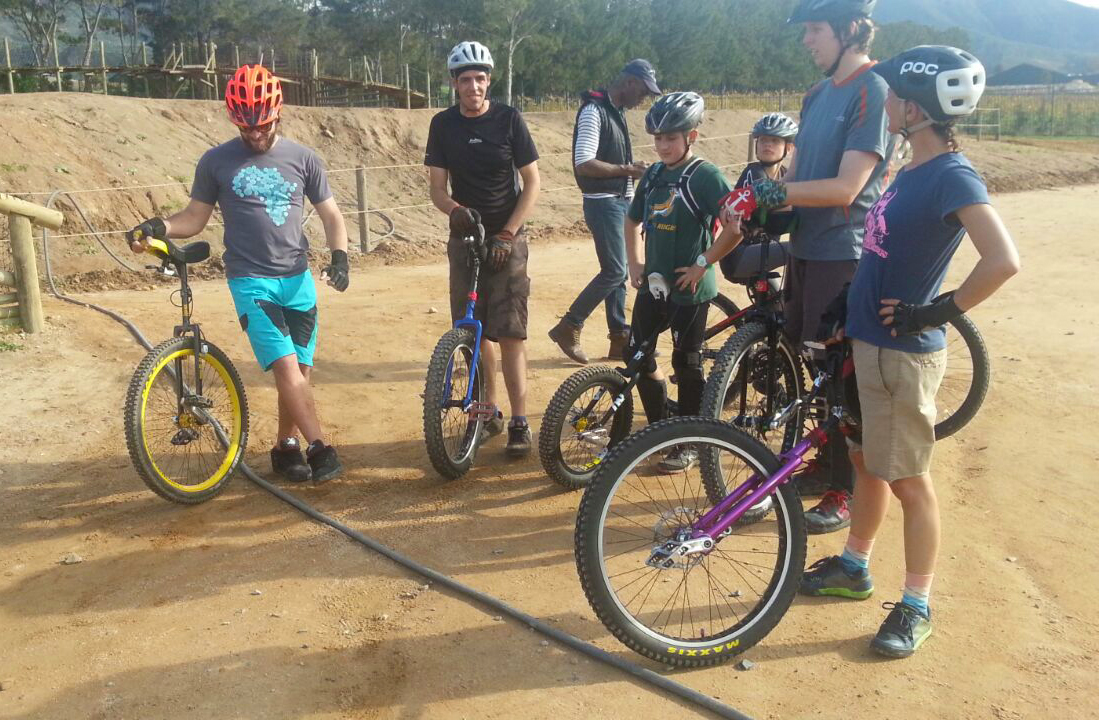 After the morning fun at the Bike Park we decided to get some grub in Muizenberg. We filled up our tanks and were ready for the afternoon ride. We left the Tiger’s Milk and headed towards Kalk Bay, a 3km fun ride along the beach front. We stopped often and tested our Trials skills on benches, stairs, skinny wall rides, etc. 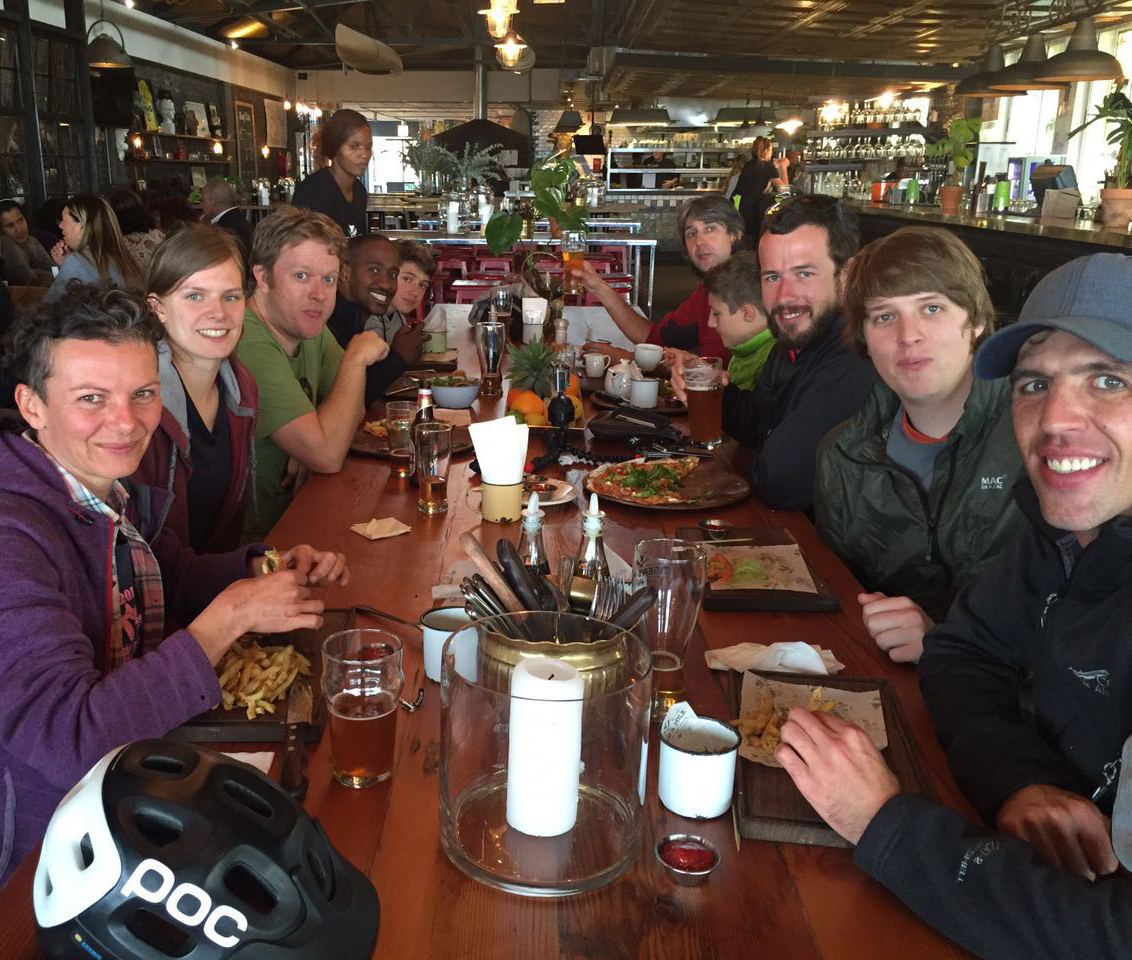 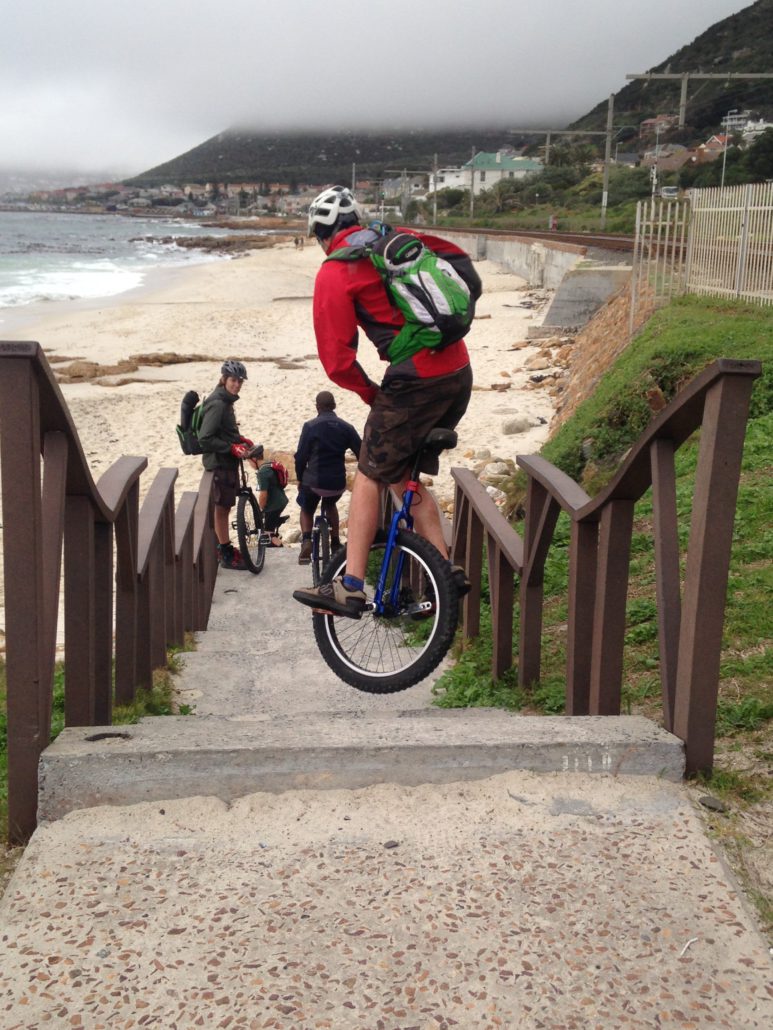 Shaun Devenish getting some air time with his stair hopping. 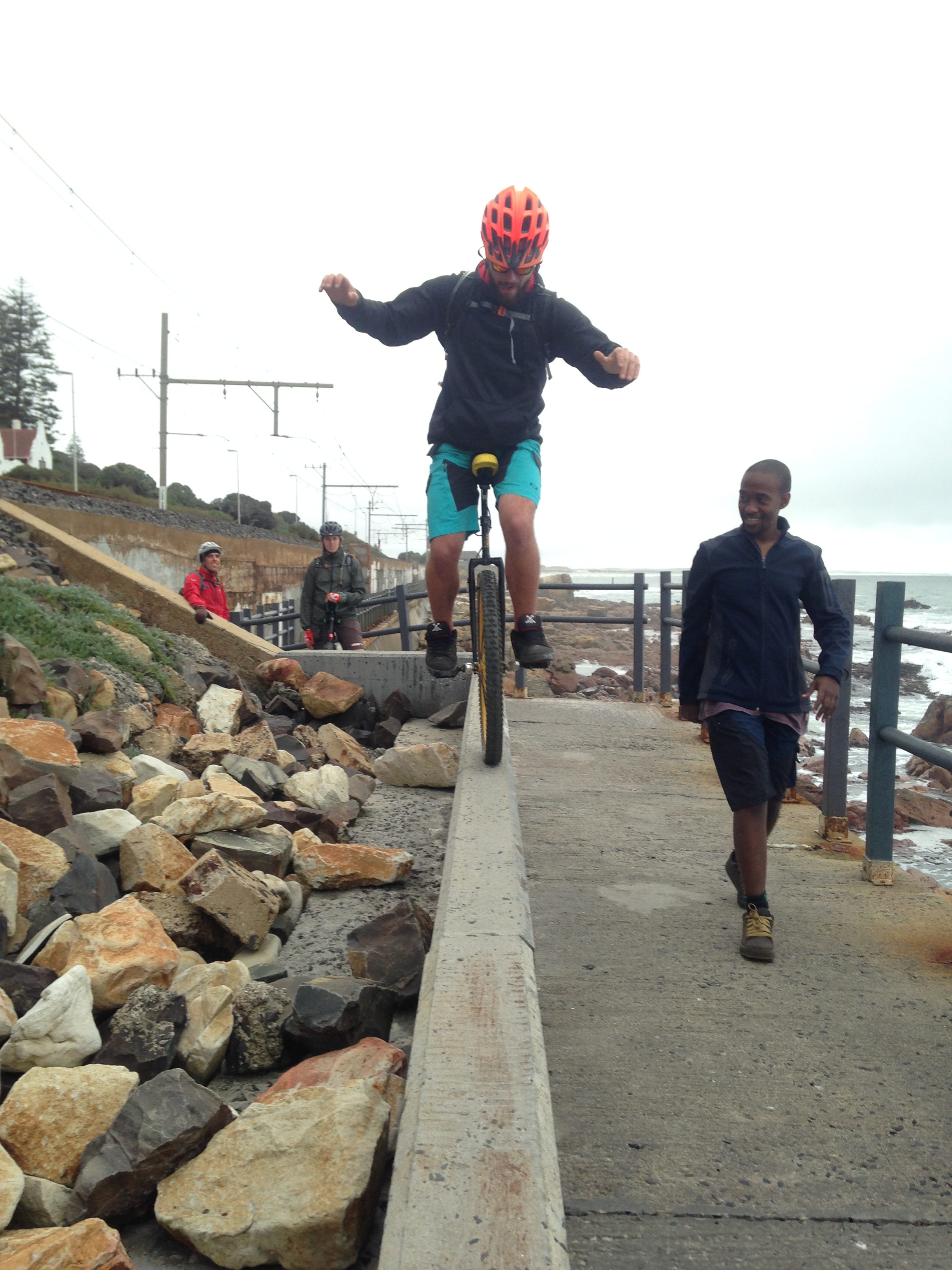 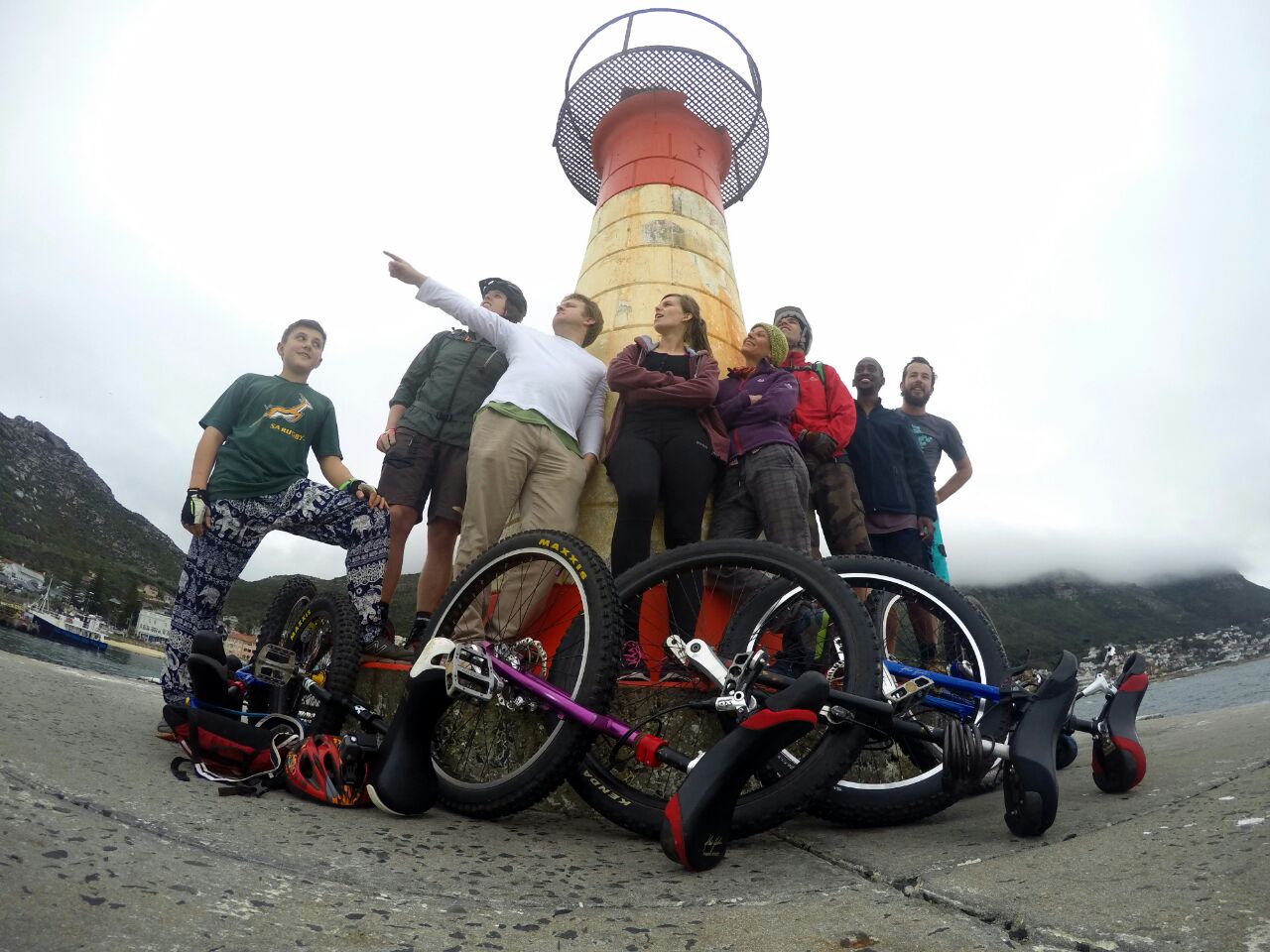 Decorating a lighthouse with unicyclists and their uni’s.

The next morning we kicked off early to be at Jonkershoek Nature Reserve by 9am. This was the start our Muni adventure! We split into two groups and headed in different directions.  One group went up the mountain to enjoy the downhill of Upper and Lower Canary, this is the group I stuck with. The other group traversed the base of the mountain on gravel roads. It was a more flat ride. My group spent the next hour, maybe hour and a half “riding / walking” up the logging roads of Jonkershoek, when we finally reached the top we settled down for lunch, tucking into a variety of nuts and biltong! Once fattened up we hit the single-track because what goes up must come down. We enjoyed 3 solid hours of downhill single-track with lots of laughs and lots of bails! We arrived back around 14:30 where I immediately ordered a MASSIVE milkshake and slice of carrot cake at the coffee shop by the entrance. 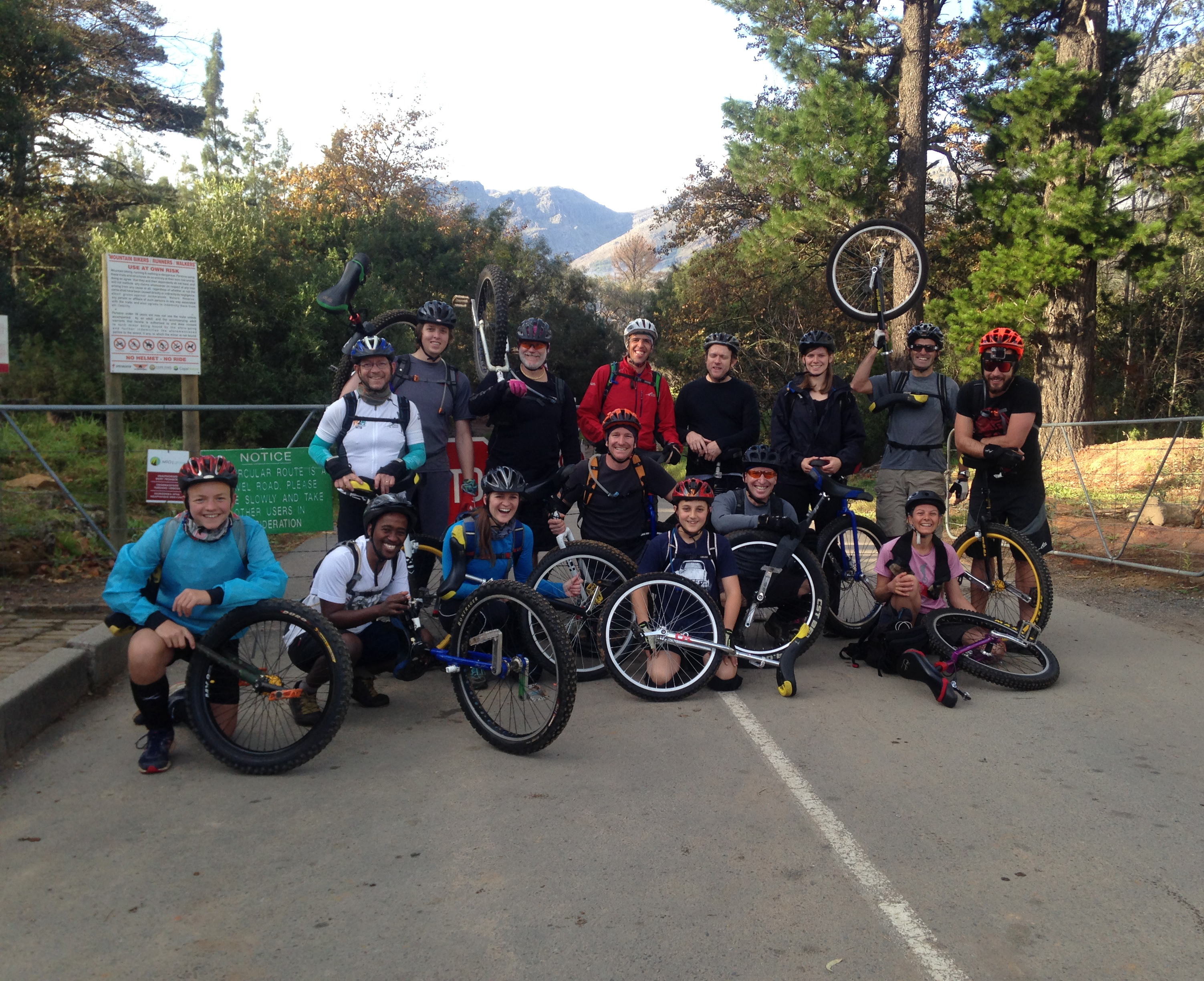 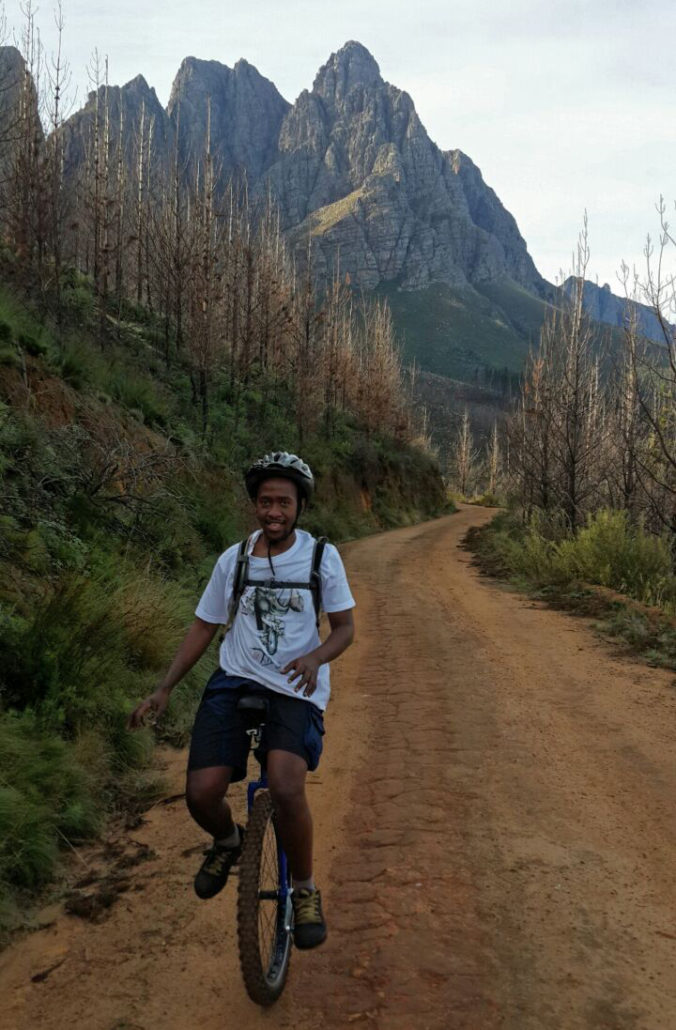 Something about Jonkershoek and elevation.

The next day was the “day of balance”! We all met at The Shed in Stellenbosch and prepared for a day of circus fun! The first hour was a mixture of electric uni’s and giant pogo-sticks. Then later the hockey began! This was my first time playing unicycle hockey so I was quite nervous but I quickly adapted. We spent the next few hours playing match after match of uni-hoki It was a really awesome experience and I recommend that everyone gives it a shot. The next while was spent trying to ride a giraffe and ultimate wheel. An hour later Unidaba slowly came to a end. 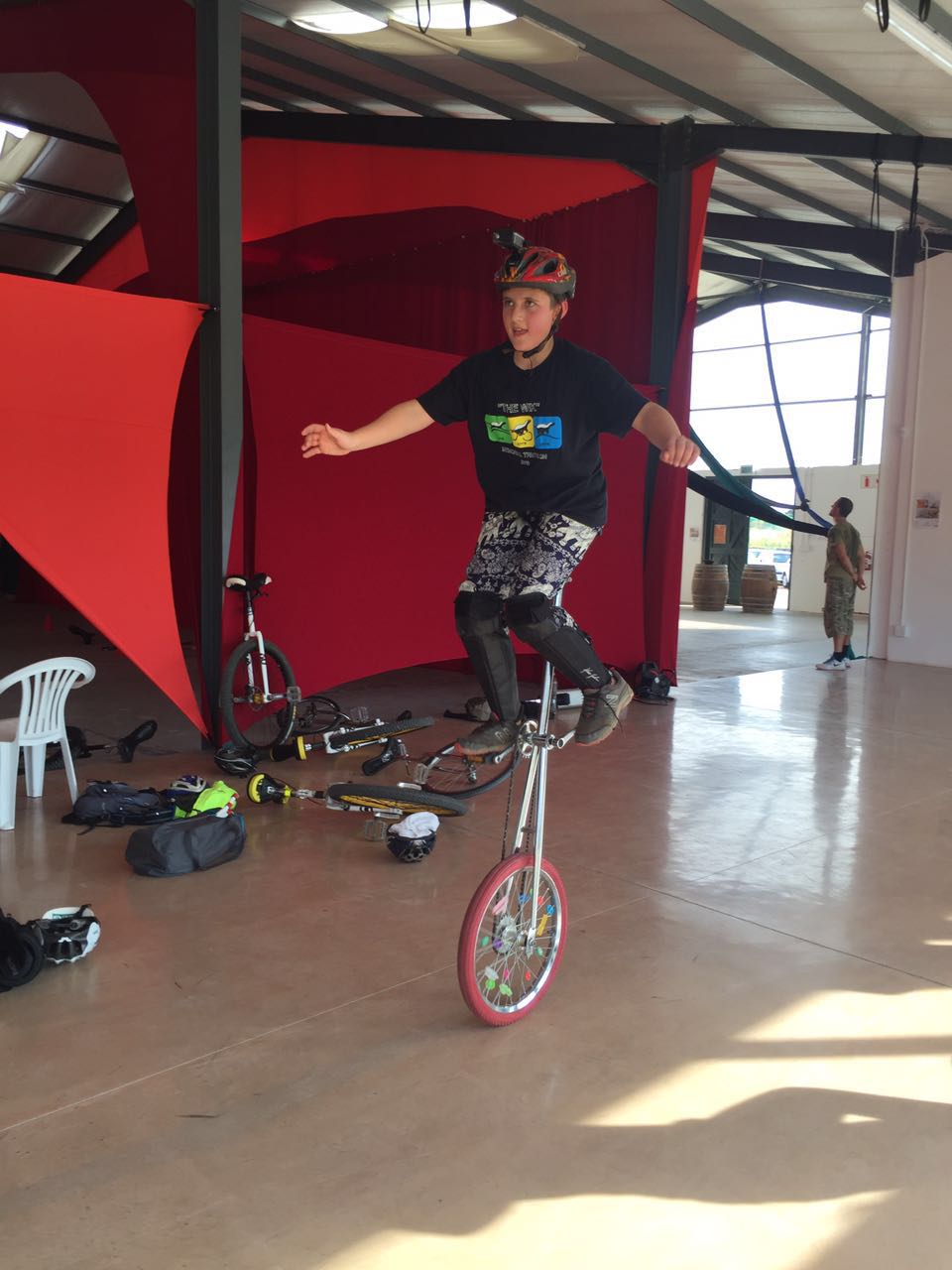 Owen Venter experiencing a giraffe for the very first time. Can you see the stoke? 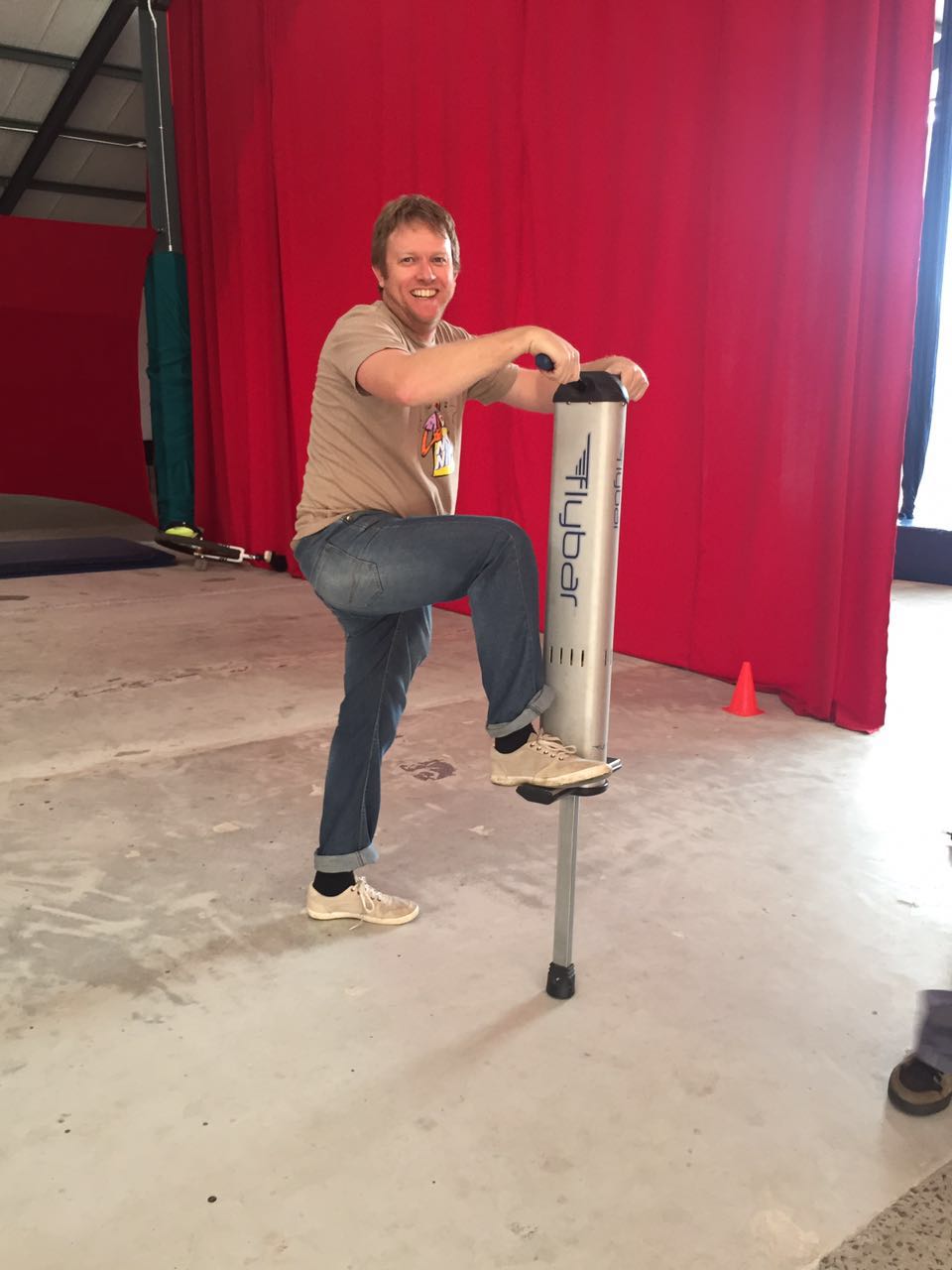 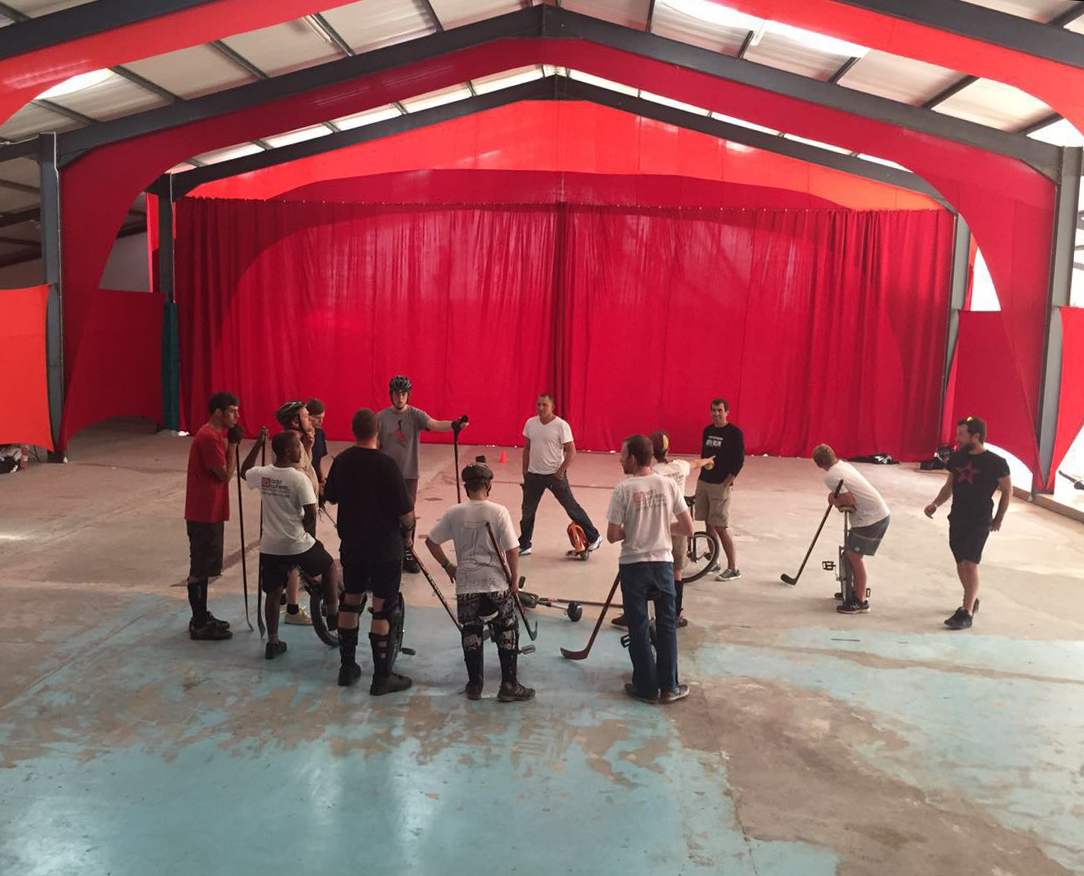 The convention was an amazing experience and I recommend that EVERYONE should come to UniDaba 2017. UniDaba was not just a whole lot of people riding unicycles, it was a place were you could grab a few tips or try out some new tricks. It was a place where you could have a decent conversation about unicycling or anything related to unicycling. UniDaba is not just for experts, it’s for everyone! Its for the real pro’s to the one’s who are still looking to learn!

I would like to say a huge thanks to Donna Kisogloo at OddWheel Unicycles for setting up such an amazing weekend!

UniDaba is now a permanent event on the South African unicycle calender. It happens every year and happens during the mid-year school holidays. Tell other unicyclists about the event! It’s fun!