I’ll start this post off with – “Can you believe it actually happened?”  After last years first official UniDaba I felt very inspired to pour the same energy, if not more into the organising of this years gathering. A week after last year’s convention I had decided on a venue, and was trying to get more community members involved.  I guess that didn’t turn out the way I was hoping.  I changed the venue a couple of times, still no feedback from ‘the community’.  S*** went down and life flipped upside down.

The convention was a shadow in the back of my mind.  July arrived and still no one had taken any initiative to arrange a convention.  So I tried again, this time with more of a ruthless technique of 7 people, a few questions and a yes / no voting system.  You would think that this would be flawless – it’s not!  What it did do was help me understand what could be done with the time available.  What remained was sitting behind a computer for a few hours compiling all the components that make a simple event and telling people about it.  Walla, you’ve got a convention!  We even had a t-shirt that Jonathan Naidoo designed for us.  Who be Jonathan Naidoo you ask?  A Cape based unicyclist who is in he’s 3rd year of animation.  Doing the t-shirt was by far one of the easiest parts of organising the convention. 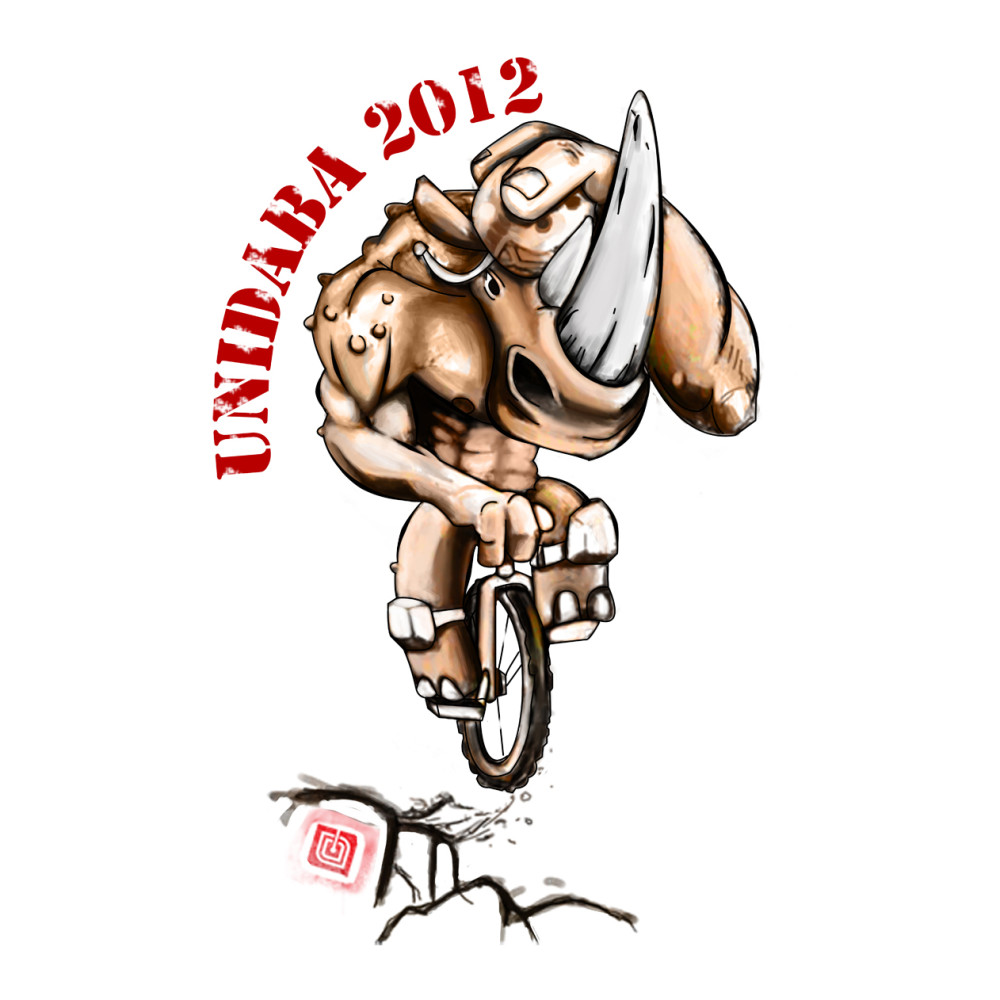 We kick-started the convention on Thursday night by congregating outside the Alexander Theatre in Joburg, we were going to be armchair adventurers for the evening coupled with an unexpected SSWC (Single Speed World Championship) reunion.  A night out at the 4th edition of FEAT (Fascinating Expeditions & Adventure Talks) listening to an incredible line up of crazy folk and their crazy experiences.  The FEAT format is 10 adventurers talk for exactly 7 minutes with the aid of a slide show. 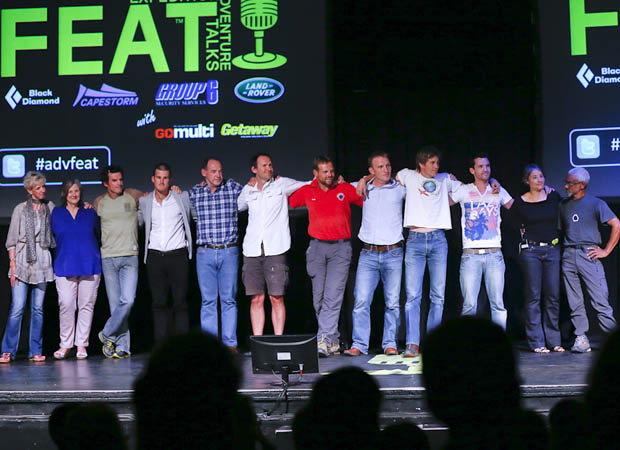 Just to give you a heads up, Lisa has expanded FEAT to Canada.  The next night of talks for FEAT Canada will be in March 2013 where special guess… you got it… Kris Holm is doing he’s 7 minutes.  The work continues to spread the unicycling love!

Friday saw the collective gather at Emmarentia Dam.  We did the usual parking lot banter with hand shakes and hugs for at least an hour before eventually moving to the Rose Garden with all the blossoms showing off their shades of pink, not purple.  We made our nest for the day by setting up a slack-line, spoke a little bit more unicycle jargon, checked out the 20” unicycle Bertie Rietveld made which is quite impressive.  I know I couldn’t build a unicycle, kudo’s. 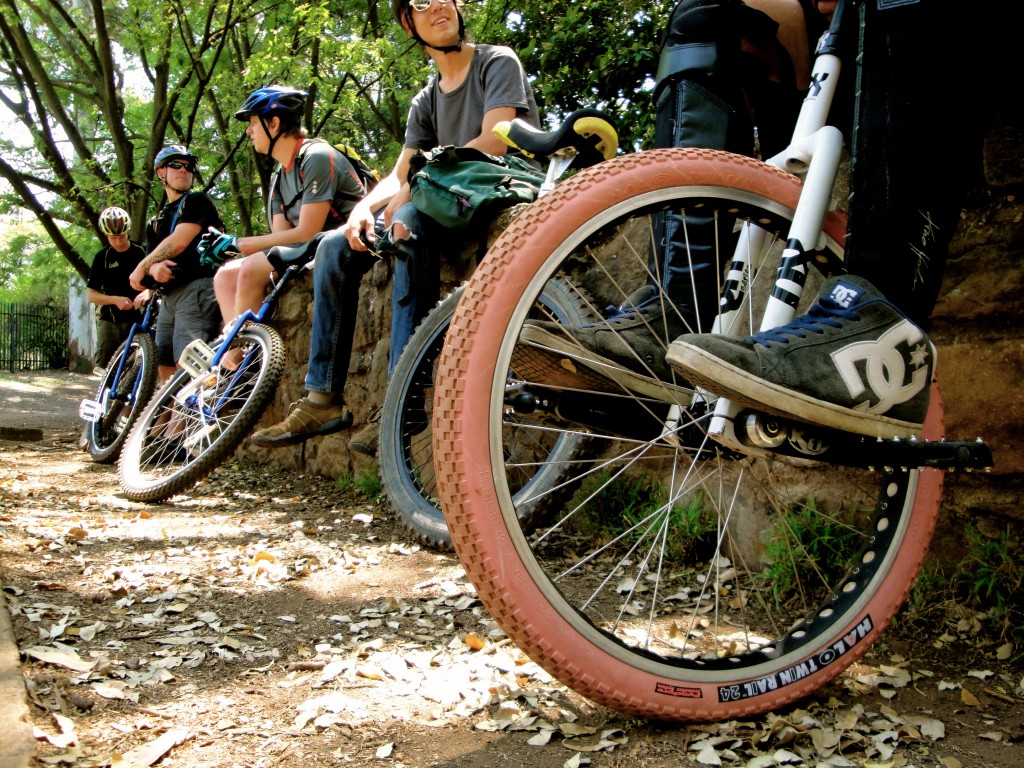 We come to the gardens for a day of trials and a gentle Muni ride.  In the parking lot without even discussing it everybody grabs their big wheel and leaves the small wheel in the car (all but Bones and Bertie).  The unspoken decision sent us off on our gentle Muni meander around the Gardens.  Playing on whatever obstacles crossed our paths.  It’s a really nice thing to see adults being children, without a care in the world and being completely absorbed in the moment.  No hectic injuries to report, but one cool thing was that Alan and Gavin rode on a bumpy floating platform that makes up the perimeter of a court at the yacht club.  Not sure what sport is played on kayak’s but it has to do with a basketball hoop on either end.  After our Muni sesh, we obviously worked up an appetite.  Promptly packed up the nest and made our way to Doppio Zero for the mid-day feeding.  It was a delicious feed.

A handful of us made our way back to the gardens for an afternoon nap.  Since it was nearly peak hour traffic there was absolutely no reason to go sit in a car when you could be napping in a Rose Garden.  That we did.  Eventually managed to pry ourselves off the grass and try our feet at some 20-skill-man-ship.  Got some cool GoPro footage from this session, hopefully it will materialize into a video one day. 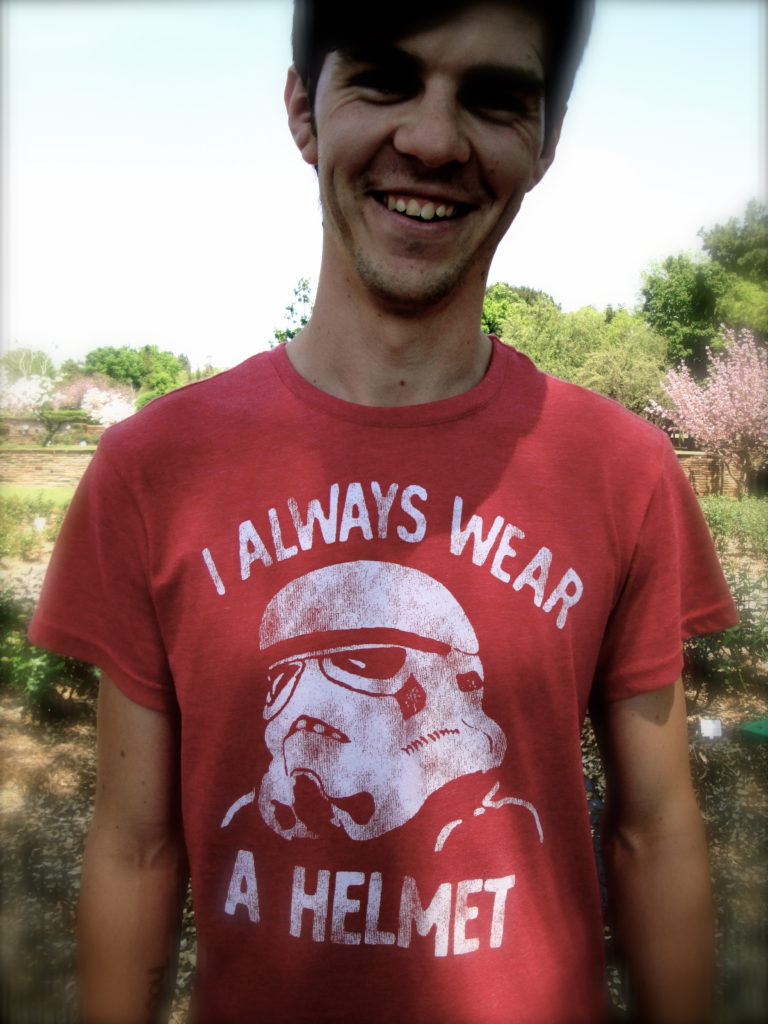 Saturday saw the Greaves home have an onslaught of unicyclists.  Sue and Merak were gracious enough to open their home to the community for the day, thank you.  What an awesome spot it is!  Fenced in tennis court leading onto an undercover lapa equipped with a pizza oven and en-suite salt-water pool.  We spent the day playing game after game after game.  A very complex system was formulated by our master-in-command, Julian to establish teams.  I didn’t question the system; it seemed to work very well.  All I remember is 4 teams on the black board with between 8-10 players in a game.  Each game was manned by the “$@*%ING REF” bearing a water gun and whistle. 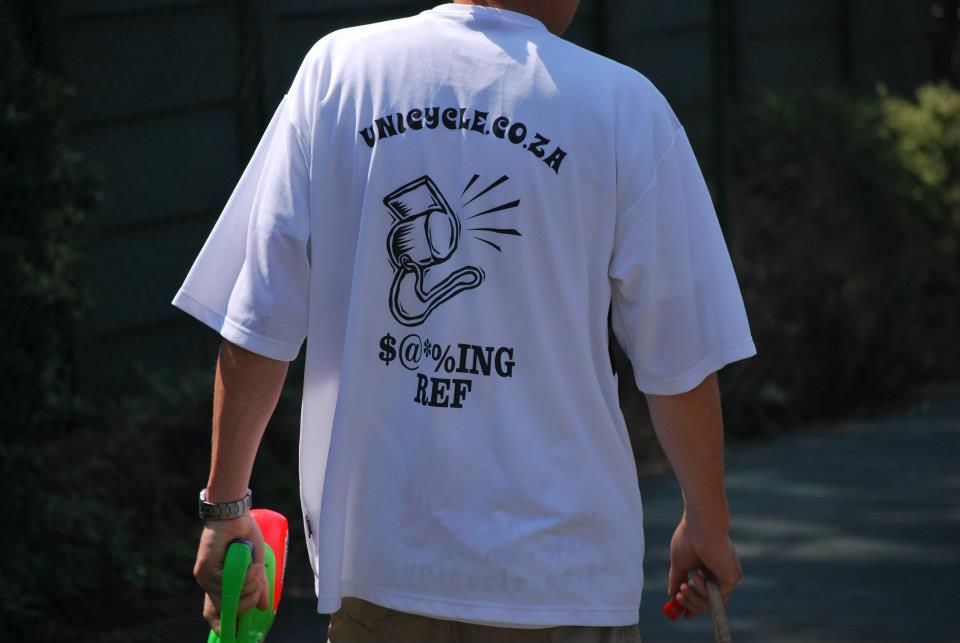 We made some delicious pizzas, got to eat them and drank refreshingly iced beverages prepared by Sue. It was a fun filled day of floating in the space either on your unicycle or not, baking under the African sun.  Chilling with the crew.

You may or may not know but Uni-Hoki has a floating trophy.  Yip, it goes home with the best team each year.  In the past it went home with the best player and that player earned the right to customize the trophy.  Over the years it has evolved into the piece of art we now call the UniDaba Uni-Hoki trophy.  Last year saw the Caapies take it; alas we had to do it again.  How did that happen?  Something to do with floating? 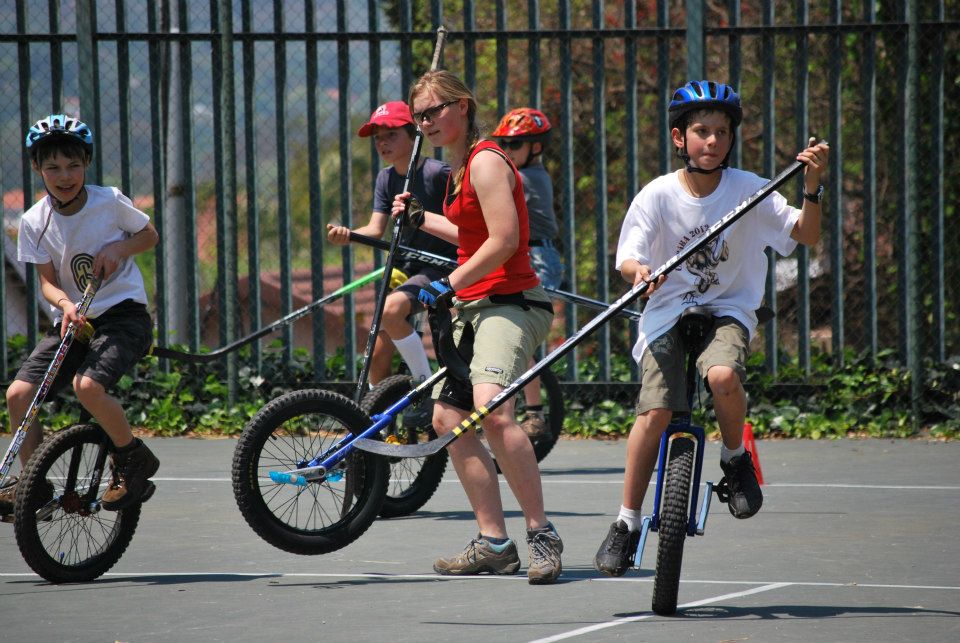 Sunday arrived and as usual Alan and myself were late.  Fortunately we were not the only latecomers in getting to Groenkloof Nature Reserve.  Eventually after an even longer parking lot banter session we gear up and start our delightful flowing meander through the reserve.  We rode past some Zebra, essentially pretty African styled horses.  It was a really good ride.  We even had the token female Physicist jogger along side us – thanks to Hannes.  No injuries if I remember correctly.

It’s been 4 weeks since UniDaba and my memory or the weekend’s finer detail has faded.  I’m sorry I can’t fill these pages with more uni jargon from the weekend.  All you need to know is that we had an awesome time playing uni uni.  Got to meet a bunch of new faces that were only names in the past.  Do what we love to do – live life!  And in our case live life through the medium of unicycling.

Rumour has it that Gavin Stockden might take the reigns and organise a convention Durban style.  So looking forward to it Gav! There’s another rumour floating around that the South African unicycling community has the opportunity to bring Unicon 18 to South Africa.  If you would like to volunteer your time, interspersed over a couple of years with the goal of successfully hosting Unicon 18?  PLEASE contact the OddWheelers.  We cannot do it on our own!  Imagine over 2000 unicyclists in South Africa, Cape Town all at one time.  You could probably meet your hero’s! 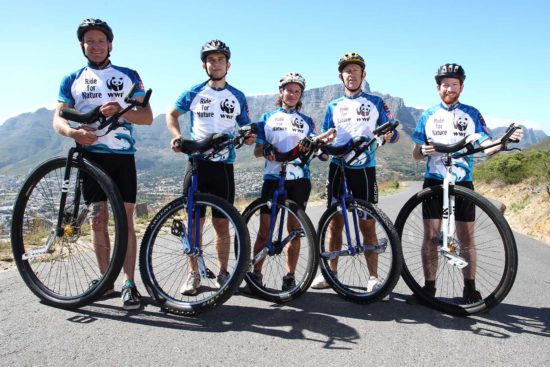 Reflection of a Unicyclist – Training for Argus 2014
Scroll to top