One Love: Discovering the Wheel

The last few years of my life have revolved completely around rock climbing, culminating in my first big mountaineering expedition in December last year.  Since then the itch to climb a lot has left me, but the addiction to challenges and adrenaline has most certainly not.

I recall as a boy being intrigued by unicycles, as I’m sure most children are. My interest was not just in the strange one wheeled “bicycle” but more in what it took to ride that thing! That interest was tucked away somewhere and jumped to recollection this year when I came across a 13 year old girl in Zambia who was in fact the famous springbok rugby player, Gavin Johnson’s daughter. We were visiting their lodge in Zambia when I saw her unicycle lying around. Never in my life had I had the chance to actually lay my hand on one of these. So for the first time ever I picked it up checked it out and thought to myself: I’ve always wanted to try this! Ignorantly I climbed on it. Seat low enough for a 13 year old girl and I thought, well maybe I’ll be able to get going, right here right now after a few goes. Little did I know the moment I sat on that little Chinese unicycle that the search for a challenge and an adrenaline rush outside of climbing had come to rest, on the plastic seat of a small unicycle in Zambia! 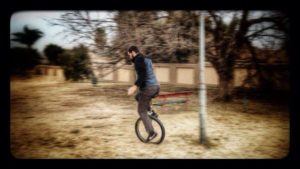 After attempting to sit and balance while firmly holding onto my wife and a pole and not even being able to balance on the spot (which back then I thought would be the obvious first skill to learn on this thing) the owner of the unicycle proceeded to show us her skills of unicycling after 6 months of practice! She looked pretty smooth and controlled and maybe even more determined. So the first day back in SA (7 July) I jumped onto the interweb and proceeded to find a unicycle on Gumtree. I downloaded some basics videos and went to collect the unicycle. At this point I still thought I would be up and rolling in a day or 2… little did I know I was about to start trying to master the hardest skill I have had to do to date. I keep telling people that unicycling is the hardest thing I’ve ever tried to do. Their response is mostly always, even harder than climbing with one hand? Or playing the drums with one hand? Truthfully, I thank the Lord for the determination he has enabled me to learn through all those tough things I’ve tried in my life.

…but yes it’s harder than all of those.

20 Days 20 hours before I lost count… that’s how long it took me to ride 50m, not 50 smooth graceful meters, 50 swerving, wobbling meters. The motivating factor for me through those hours was the few successful runs I had. Even if they were short, the feeling of running on air, moving forward standing upright but without the jolting and bouncing that comes with running. Cycling has always been a bit of a painful thing for me to do as holding on with one hand gets really tiring and bending over so low so that my right arm could get to the handle bars always gave me a sore back, but there is none of that with unicycling and that truly excited me!

Part of the learning process for me was learning about all the parts of the unicycle. Granted it’s a fairly simple machine, but there are some fundamentals that never dawned on me at first. Like which is the front and which is the back? After a week I realised I was riding the unicycle with the tyre rotating backwards, the previous owner just had the saddle facing that way so I never questioned it. Something else the previous owner did was put the incorrect peddles into the incorrect cranks. Which after a week meant my cranks had very little thread left.  At first I thought: NO PROBLEM. My local bicycle shop I’m sure has basic cranks. They did have but as I’m sure any experienced cyclist knows they only have left ones…. and no you cant just use 2 left cranks. BUT I did and it worked for another 10 days or so, before stripping the thread on the right side crank!

After some more time on the web I started to learn all there is to know about cranks, hubs, frames etc. I started to realise that my pride and joy unicycle was actually pretty cheap and nasty in comparison to the grand brands and beefy yet light components there were out there!

So my Gumtree hunt began again…

The real break through in my learning happened when I learnt how to free mount – 4 August. Although I now know I had in fact learnt the not-so-great way of free mounting, I was now no longer reliant on holding onto inanimate objects to get started. Being able to mount anywhere automatically meant I could actually go places on my shiny Chinese uni!

So I started hitting the park trying to follow paths but mostly failing at that, but I was able to stay up and going for 10 minutes which was enough to keep me smiling all the way back up the long hill I had just wobbled down, with the hope that one day my wobble would be more of a glide.

11th of September was the day I got my first real unicycle. A limited edition QU-AX 20” nick named “The Great White” and a pair of KH leg protectors all off Gumtree for a steal!

I’ve realised that in unicycling the learning never stops. After getting on “The Great White” a few times I started to learn proper free mounts i.e. not rolling back at the start, hopping and jumping etc. I always thought cyclists who were snooty about light components and name brand stuff were just in it for the self-image, but SERIOUSLY I realised after getting a name brand uni, that there is lots to be said about a well-built machine!! 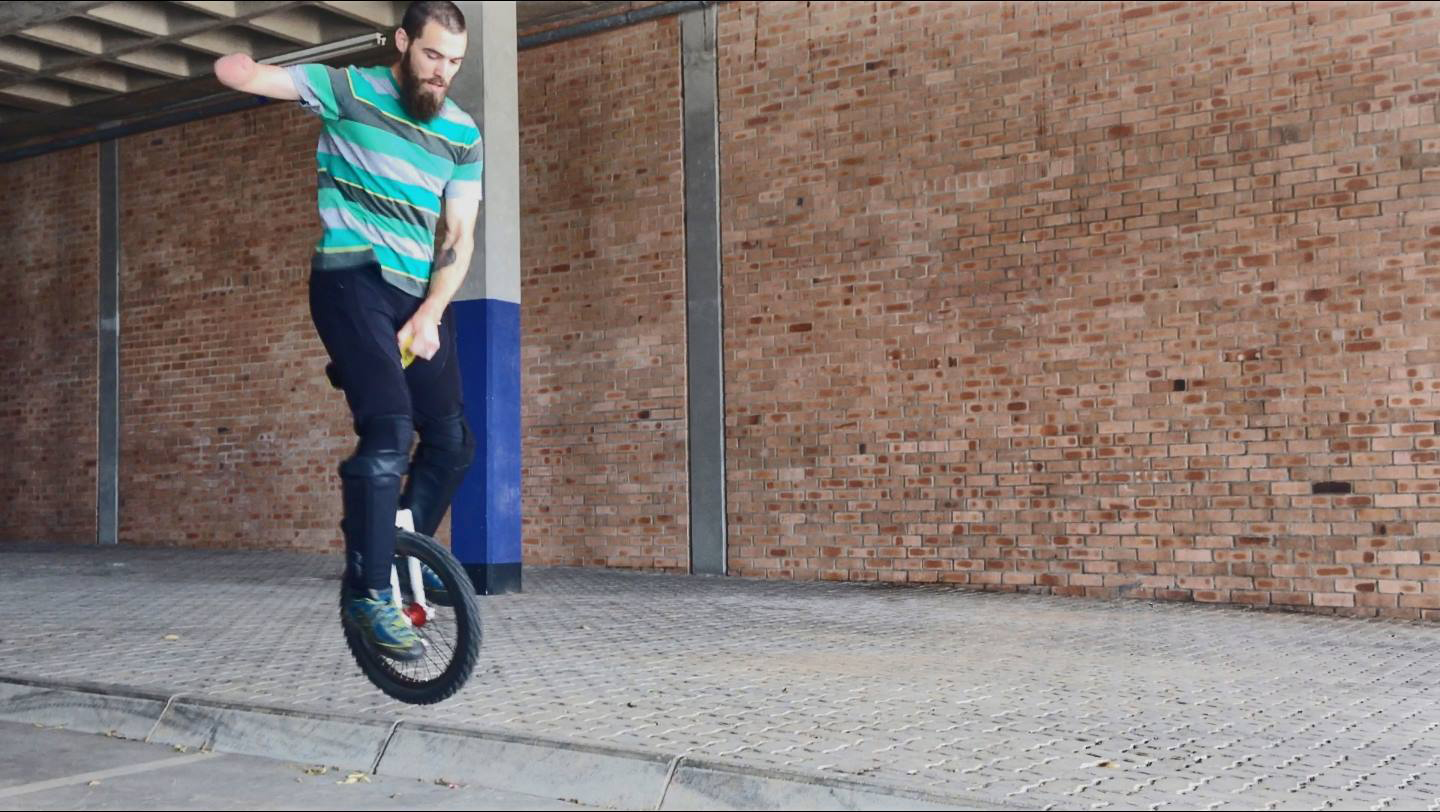 3 Months after I now own 3 unicycles… not because I am a gear junkie (although my wife may disagree), but because I think unicycling is simply fantastic. I wish everyone could have the time and the determination to get it right. The feeling of gliding along is as great as I had imagined, especially on my new KH26. I’m always one to dream big and I have big dreams of expeditions in the future including a unicycle or 2. Till then I’m gonna keep learning and gliding along.

Oh… and if you ever want to learn to ride but don’t have a uni, get hold of me if you are in JHB. The shiny Chinese unicycle is doing the rounds and it may just get you hooked. 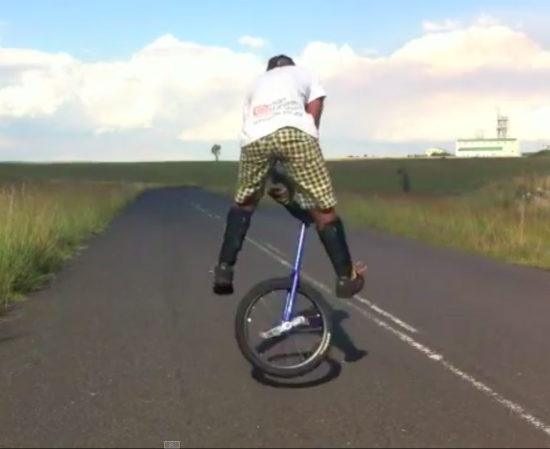 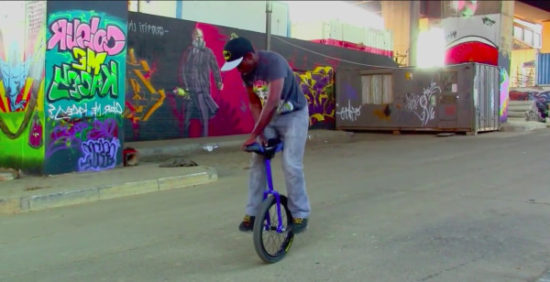